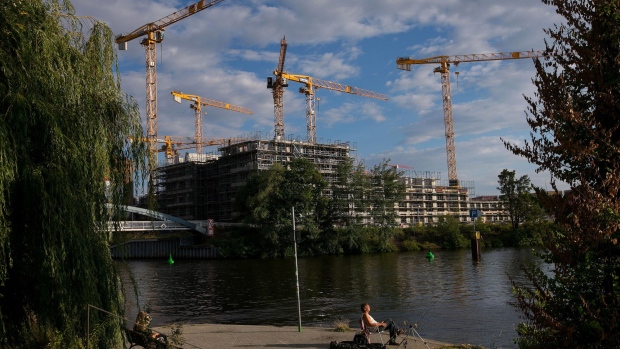 Construction cranes stand above the Europacity project residential building site as a fisherman sits beside his rod on the bank of the River Spree in Berlin, Germany, on Wednesday, June 27, 2018. In a rough-and-tumble corner of former communist east Berlin, Canadian rocker Bryan Adams is turning a downtrodden industrial site along the Spree river into exclusive artist studios. Photographer: Krisztian Bocsi/Bloomberg , Bloomberg

The real estate investor is considering offering around 36 euros per share or more for a stake in the company as soon as this month, the people said, asking not to be identified discussing confidential information. A bid at the 36 euros mark would value CA Immo at about 3.6 billion euros ($4.4 billion).

It would top the 34.44 euros per share Starwood Capital has offered and CA Immo’s current stock price of about 35.80 euros. A representative for Aggregate referred to a January statement saying the company is considering a bid for a stake in CA Immo, declining to comment further. A representative for CA Immo declined to comment.

Unlike Starwood Capital, which has offered to buy out all other shareholders of CA Immo, Aggregate is vying for a partial stake in the company, the people said, potentially limiting the attraction of its proposal to investors.

Starwood Capital’s bid formally opened on Monday and will run through April 9. The U.S. investor is already CA Immo’s main shareholder with a stake of around 30%. Run by Barry Sternlicht, it has been betting on CA Immo’s prime office space in Berlin and other German cities.

Aggregate is wholly owned by investor Guenther Walcher and already has exposure to property in Germany, including through its stake in Adler Real Estate AG, a landlord with links to Austrian businessman Cevdet Caner. In January, Aggregate confirmed a Bloomberg News report that it was weighing an offer for a stake in CA Immo.