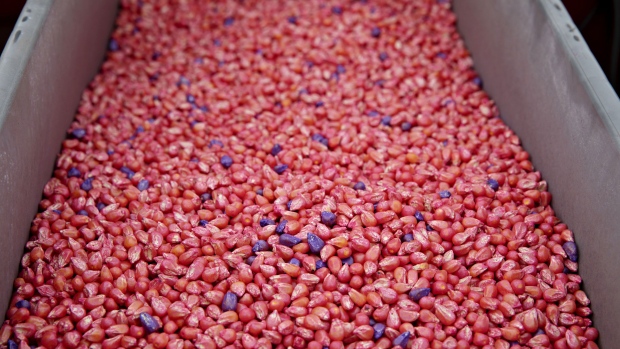 Corn seeds sit in a hopper on a planter outside Henry, Illinois, U.S., on Monday, April 20, 2020. Corn and sugar futures tumbled to the lowest in more than a decade as the meltdown in crude oil cascaded through agricultural markets. , Bloomberg

(Bloomberg) -- Inari, a startup specializing in seed technology, has reached a $1.2 billion valuation after raising $208 million in fresh financing.

The Cambridge, Massachusetts-based company’s funding round was co-led by Flagship Pioneering, which founded the firm. New investors included G Squared and Pavilion Capital, while participating existing backers include Alexandria Venture Investments, Investment Corp. of Dubai, Rivas Capital and Banque Pictet, on behalf of its clients.

Inari aims to make food production more sustainable, using gene-edited seeds to enhance crop yield while requiring less fertilizer and water. The funding will be used to accelerate development of its existing corn and soybean platform; expand into new crops, such as wheat; and grow in markets outside North and South America, Inari CEO Ponsi Trivisvavet said in an interview.

“We have tested our products in greenhouses and in the field, and look forward to bringing it to the hands of farmers in a couple of years,” she said.

Founded in 2016 and named for the Japanese god known for bringing prosperity to harvests, the company’s edited seeds can drive 10% and 20% yield increases for corn and soybeans respectively, Trivisvavet said. Use of existing technologies can result in just 1% yield increase per year, she said.

“We had a simple yet bold and compelling vision to fundamentally transform the global food system through using cutting-edge science and technology to unlock the full potential of seeds,” Robert Berendes, an executive partner at Flagship Pioneering, said in an emailed statement. “We believed we could do so in a way that restores our planet, significantly broadens the options for farmers and greatly expands the biodiversity of the food that we eat.”