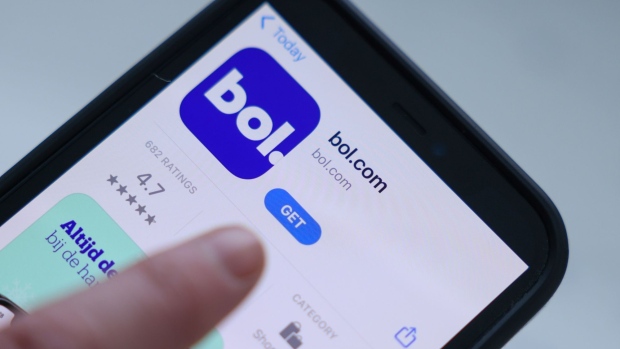 (Bloomberg) -- Royal Ahold Delhaize NV raised its forecast for the year as it weathered soaring inflation, but pulled plans to publicly list its Dutch e-commerce unit Bol.com due to volatile equity market conditions.

The Stop & Shop owner said it now expects underlying earnings per share to grow at a mid-single-digit rate this fiscal year relative to 2021 as customers continue to head to its stores despite rising prices. It previously only expected to match 2021 growth levels. Ahold also raised its free cash flow guidance and said it still expects its adjusted operating margin to be at least 4% this year.

Although the retailer has pulled the initial public offering of its online Bol.com unit it could pursue the plan at a later date “when equity market conditions are more conducive,” according to comments published with its Wednesday earnings report.

Bol.com was founded in 1999 as Europe’s first online bookstore. Ahold bought it in 2012 and it is now the largest online retail platform in the Benelux region and has expanded to selling general merchandise products.

Ahold proposed a sub-IPO last year that would have offered a small stake in Bol.com on Euronext Amsterdam with the grocer retaining significant control in the long-term.

“We’re absolutely convinced in Bol as a strong future-focused brand for us,” said Chief Financial Officer Natalie Knight in an interview. “We’ve got market share gains again in the quarter and we’re firmly committed to crystallizing the value of the brand but right now the market conditions just don’t support it.”

She added the company has identified a “more flexible” investment plan to support Bol’s future growth and the unit will continue to grow faster than the market going forward.

For the group, Ahold reported adjusted operating profit for the second-quarter of 880 million euros, which was better than expected. Revenue from online orders rose to just over 2 billion euros in the quarter from 1.81 billion euros at the same time last year.

Like many grocers battling the worst inflation in decades, Ahold has raised prices this year but according to Knight, price hikes across all of Ahold’s markets are lower than overall inflation rates.

The company’s margin was more “resilient” than expected, according to Bernstein analyst William Woods. Bernstein said the “strong set of results” and pulled IPO should be received positively, given the lower valuation as well as the grocer’s need to prioritize free cash flow along with buybacks.

(Updates with shares in the third paragraph and further details throughout)