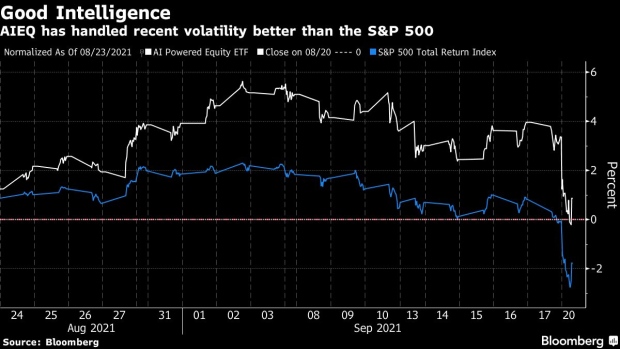 (Bloomberg) -- As humans on Wall Street grapple with the latest stock volatility, at least one $167 million robot appears to have seen it coming.

A machine-led exchange-traded fund that’s edging ahead of all three major U.S. equity benchmarks in 2021 has been cutting back risky holdings in recent weeks -- shifting into Big Tech and cash in the midst of the September swoon.

The AI Powered Equity ETF (ticker AIEQ) has been placing big bets on high-performing mega-cap companies, according to DataTrek Research. It didn’t save it from the Monday slump, but the strategy is paying off overall: The fund has returned 0.9% in the past month, outperforming a 1.9% loss in the S&P 500.

“Our regular reviews of this ETF show that it quickly changes both the number and types of holdings to include better performing names,” Jessica Rabe at DataTrek wrote. “That’s clearly worked of late.”

The fund has cut total investments to 89 from 139 just over a month ago, according to DataTrek. The top 10 positions account for 44% of its exposure, the highest level since at least April, while it’s also holding the most cash in months.

AIEQ -- which is managed by a quantitative model running 24/7 on IBM Corp.’s Watson platform --  has regularly shown confidence in the tech megacaps, and it hasn’t always paid off. Earlier this year the fund’s performance suffered because of its heavy exposure to these growth names as the rest of the market chased the reflation trade.

That hasn’t stopped it loading up on them again. In early August, Alphabet Inc. was the only tech heavyweight in its top 10 exposures, according to DataTrek. Now Apple Inc., Microsoft Corp. and Amazon.com Inc. make up the top three, followed by Google’s parent, according to data compiled by Bloomberg. Twitter Inc. and Roku Inc. are also in the top 10.

During Monday’s selloff, tech shares were among the hardest hit, and AIEQ dropped 2.4% as the S&P 500 retreated 1.7%.