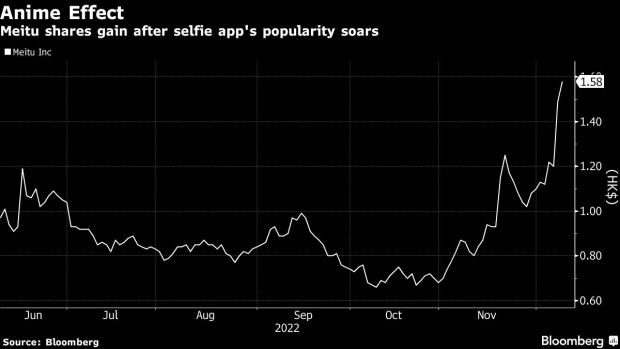 (Bloomberg) -- The ability to turn a user’s selfie into an anime character has turbocharged the Meitu app to the top of Japan’s download rankings over the past week, spurring a big jump in the company’s shares.

Hong Kong-based Meitu Inc. is up more than 50% over the past couple of weeks, in which time its app has reached the top of Apple Inc.’s free iPhone downloads chart and number 2 on Android’s Google Play in Japan, according to data.ai figures. While not new to the Japanese market, the key novelty in the beauty app was the addition of the option to transform a photo into an anime style with the help of AI.

Meitu has been working on AI photo tools since 2017 and that’s begun to pay off with the anime-style selfies, which were rolled out in China on Nov. 24 and hit global markets like Japan three days later, co-founder and Chief Executive Officer Wu Xinhong told Bloomberg. Since last week, the Meitu app has been among the top 3 most-downloaded on Apple’s App Store in countries including the US, Brazil, Canada, Australia and New Zealand, the CEO said. Global downloads surged 79% in the week commencing Nov. 28, data.ai figures showed.

“We are seeing an explosion of AI-generated content and its huge potential,” Wu said. “It’s an unprecedented opportunity for us, a technological revolution.”

The use of AI to generate or alter images has taken off in popularity this year with the introduction of text-to-image systems like Midjourney and OpenAI’s Dall-E. The technology is not without its controversy, but its appeal and accessibility have helped it proliferate. Meitu’s approach differs, in applying a style transfer onto an existing image. The company also just rolled out the option to add subtle animations — like falling sakura — to its AI-generated anime avatars.

Japan has proven an eager adopter of this new trend, as University of Tokyo professor Fujio Toriumi has found that 40% of hashtagged AI-generated images on Twitter since June have come from the country. The researcher, whose work includes studying information sharing on Twitter following the 2011 earthquake and tsunami in Japan, collaborated with the Nikkei to analyze the data.

“Japan has a culture of sharing manga on Twitter,” Toriumi said. The novelty of using AI to generate similar pictures is “both a threat and a surprise” to that established audience, but many are embracing it out of curiosity. “For most people, it’s a one-shot, but I think some will continue using it in unique ways.”

At its peak in recent months, the AI art fascination was generating close to 80,000 tweets per day out of Japan, though the current flow is about a third of that, Toriumi said. Still, he anticipates more new uses in the future, including AI-generated fashion models for clothes companies selling gear online and other potential business applications.

--With assistance from Vlad Savov.