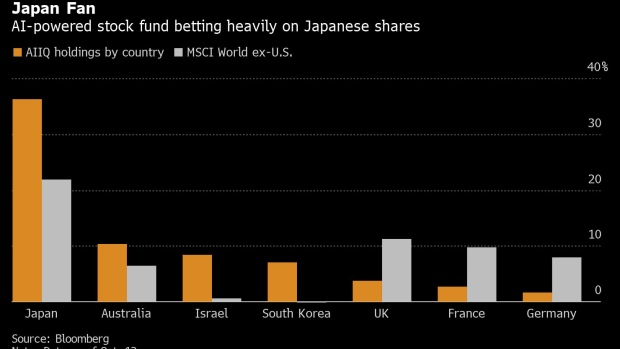 Ethernet cables in a supercomputer at the San Diego Supercomputer Center at the University of California San Diego (UCSD) in San Diego, California, U.S., on Monday, March 1, 2021. MIT researchers are using the 'Comet' supercomputer to develop an artificial intelligence (AI) approach to detect electron correlation, which is vital but expensive to calculate in quantum chemistry. Photographer: Bing Guan/Bloomberg , Bloomberg

(Bloomberg) -- An artificial intelligence-guided fund targeting stocks outside the U.S. is piling into Japanese shares that now make up over a third of its portfolio.

The AI Powered International Equity exchange-traded fund (ticker AIIQ) has increased its weighting in the country to 36% this week from just 9% at the beginning of the year, according to data compiled by Bloomberg. That compares with a 22% weighting in Japanese stocks in the MSCI World ex-U.S. Index.

AIIQ has risen about 6% so far this year, neck and neck with the MSCI gauge which is up almost 7%. The ETF beat the index by about 9 percentage points last year.

Japanese shares have been whipsawed in recent months by a change of government, the global surge in yields and a slump in the yen. The Topix Index rose as much as 8% from the end of August amid investor optimism about potential stimulus before losing all those gains by the beginning of October as investors balked at new Prime Minister Fumio Kishida’s plans for a “new type of Japanese capitalism.”

Still, the country’s shares are seen as cheap compared with international peers, with export-heavy companies that offer good exposure to the global reflation trade.

Australia is the next most popular bet for AIIQ, with a 10% weighting, while the fund is heavily underweight European shares, despite their solid performance year-to-date. On a sectoral level, the model favors technology, health care and financials stocks.

While the $11 million fund is tiny, the approach of its “manager” may be of interest to investors: an AI model which runs 24/7 on IBM’s supercomputer Watson platform. The quantitative model -- developed by EquBot Inc. -- scrapes millions of regulatory filings, news stories, management profiles, sentiment gauges, financial models, valuations and bits of market data, and then chooses developed-market stocks for the fund.

Its bigger brother -- the AI Powered Equity ETF -- invests in U.S. shares and has a market cap of nearly $170 million.

Launched in June 2018, AIIQ has delivered a total return of about 38% since inception, compared with 26% for the MSCI World ex-U.S.