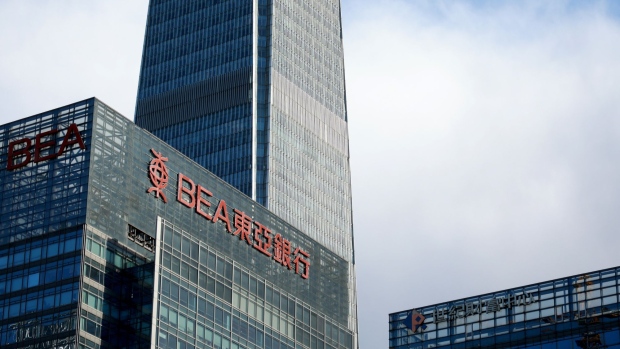 The Bank of East Asia (BEA) Ltd. building, left to right, China World Trade Center Tower III, and the Ping An Insurance Group Co. building stand in the central business district of Beijing, China, on Thursday, March 14, 2019. China is planning to approve new rules for foreign investment in the country this week, a sweeping overhaul of regulations that will affect corporate titans from Ford to Alibaba and Tencent. Photographer: Giulia Marchi/Bloomberg , Bloomberg

(Bloomberg) -- AIA Group Ltd. and China Pacific Insurance Group Co. are among the shortlisted bidders for Bank of East Asia Ltd.’s general insurance business, according to people familiar with the matter.

Zurich Insurance Group AG and China Merchants Group have also made it to the next lap, the people said, asking not to be identified because the information is private. BEA’s Blue Cross Asia-Pacific Insurance Ltd. could fetch a few hundred million dollars in a sale, the people said.

Considerations are still ongoing, no final decision has been reached and the companies could still decide against pursuing a transaction, the people said. A spokesman for Bank of East Asia said the bank regularly evaluates strategic options for its assets, and does not comment on specific processes.

Representatives for AIA, China Merchants and Zurich declined to comment, while China Pacific didn’t immediately respond to requests for comment.

BEA has been shedding assets to focus on growth areas such as its China business. A review of its insurance division led to the HK$5.07 billion ($650 million) sale of BEA’s life insurance unit to AIA last year. The deal included an exclusive agreement for AIA to distribute its life insurance products to BEA’s customers.

Last month, Paul Singer’s Elliott Investment Management announced plans to sell its minority stake in BEA, ending a period that included legal battles and campaigns to compel the bank to dispose of some of its assets.