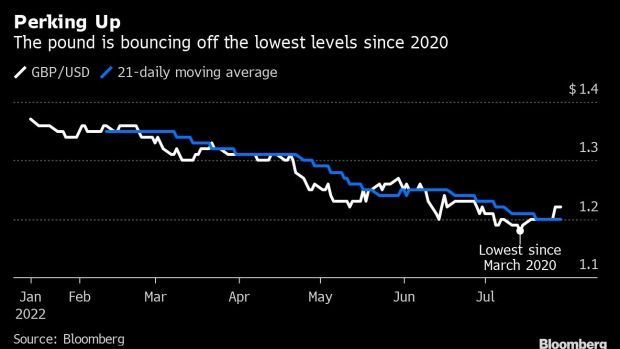 The Bank of England (BOE) in the City of London, UK, on Wednesday, June 15, 2022. The Bank of England should prepare to end interest-rate hikes before a likely recession early next year, according to Tim Congdon, the veteran UK monetarist who was an early prophet of the global inflation shock. Photographer: Hollie Adams/Bloomberg , Bloomberg

With the UK economy looking worse by the day, traders are less confident that the Bank of England will deliver the biggest rate hike since 1995.

Just a few weeks ago, a 50 basis-point increase seemed like a sure thing, and money markets were signaling 100% certainty in a more aggressive approach to tackle inflation. But now the picture is cloudier. The probability has dropped to 70%, and more strategists are saying 25 basis points would be a better choice.

It’s all because inflation is eating into household incomes and skyrocketing energy costs are set to push more people into poverty. The International Monetary Fund has warned that Britain will have the slowest growth among major industrialized nations next year. In the view of a former BOE official, the UK is probably already in recession.

“The choice for the BOE is to join the viral trend for upsizing, or keep it boring and act with caution into growth headwinds,” said Jamie Searle, strategist at Citigroup Inc.

Investors expecting a larger rate hike point to the BOE’s pledge in June to “act forcefully” if it saw persistent inflation. And the data has certainly backed that up, with UK consumer prices rising at the fastest pace in 40 years.

NatWest Markets and Morgan Stanley are among those expecting a 25 basis point increase, which would take the benchmark rate to 1.5%.

Here’s a snapshot of what’s happening in UK markets:

Bond prices have rallied for the last three weeks on expectations that the BOE will have to take a softer approach to monetary policy. The yield on 10-year gilts fell 34 basis points to 1.89% in July, the first monthly drop since November 2021. The two-year bond yield has dropped to about 1.7%, some 60 basis points lower than a June peak.

The pound has bounced off a two-year low as risk appetite returns to markets. However, BNP Paribas FX strategist Parisha Saimbi cautions the strength won’t last long. She sees losses if the BOE delivers a smaller-than-expected hike.

The FTSE 100 Index rallied 3.5% in July, the best monthly performance of the year. Consumer stocks have held up relatively well so far, but Goldman Sachs Group Inc. analysts say the cost-of-living crisis will start to pressure discretionary incomes.

Bond prices suggest there’s plenty of concern about the health of British businesses. The average yield on an index of sterling high-yield debt is trading at its widest spread over the European equivalent since November 2020.