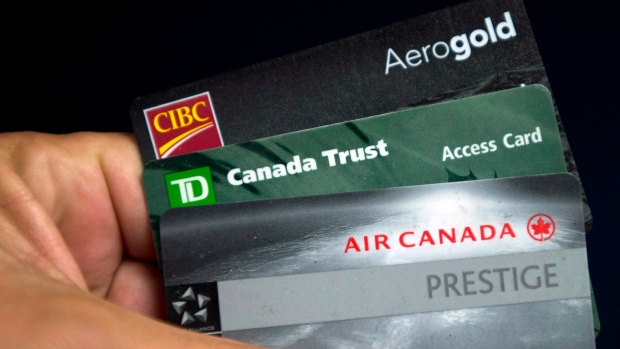 MONTREAL -- The parent company of loyalty card Aeroplan faced another brutal day on the Toronto Stock Market as its shares plummeted Friday after rating agency DBRS warned about a possible downgrade on the sale of its Nectar business at a substantial loss.

Shares of Aimia Inc. (AIM.TO) fell nearly 17 per cent to $2.31 in Friday trading on the Toronto Stock Exchange after losing 25 per cent on Thursday.

Aimia sold Nectar to British retailer Sainsbury, which was a founding partner of the program in 2002, for $105 million. Net proceeds are expected to be just $34 million. The Montreal-based company purchased Nectar in 2007 for about $755 million.

It is the largest part of Aimia's international coalitions segment, generating a quarter of the company's gross billings and 29 per cent of its adjusted EBITDA.

Aimia says the sale of Nectar will allow it to focus on Aeroplan, its largest and most profitable business, and simplify its operations. It has suspended the quarterly dividend and shed hundreds of jobs.

The company has been working to prepare for the end of its agreement with Air Canada.

The airline served notice last year that it does not plan to renew its 30-plus year partnership when the current contract ends in 2020.

DBRS Ltd. says the Nectar transaction weakens Aimia's business risk profile because of the impact on its size and geographic diversification even though its total debt will be more manageable from using proceeds to repay $100 million of debt.

"DBRS will continue to monitor Aimia's customer engagement, reward redemptions and the competitive environment on a quarter-by-quarter basis," it said in a news release.

"Should mileage accumulation decrease and/or redemptions accelerate more than DBRS' expectations, in the absence of new partnerships, divestitures and/or capital raises, a downgrade could result."

Adam Shine of National Bank Financial said the sale isn't a surprise considering that Aimia has been selling assets outside of Canada and Nectar's contract with Sainsbury was up for renewal next year.

"The latter having increasing negotiating power, the price obtained was remarkably low," he wrote in a report.

"The program will have the ability to survive, but likely on a smaller scale than it exists today," he wrote, noting that it has to find a way to retain the interest of its five million members.