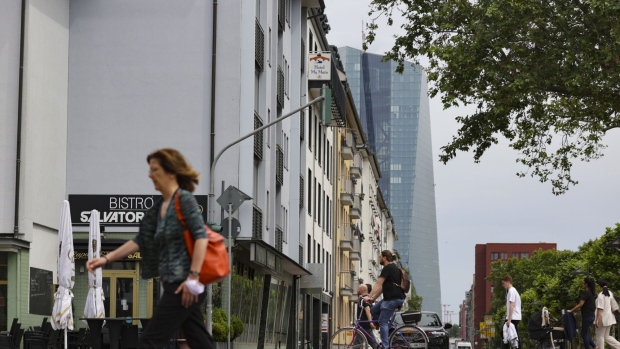 The European Central Bank (ECB) headquarters, center, beyond pedestrians crossing a street in Frankfurt, Germany, on Monday, May 23, 2022. While ECB policy makers have increasingly coalesced around the prospect of a first hike at their July 21 meeting in recent weeks, they have barely mentioned the possibility of a more aggressive half-point move such as the US Federal Reserve delivered this month. , Bloomberg

“If we have a situation where there are shocks depressing the economic outlook, uncertainty is high and output is still below its potential level, cementing the inflation path at 2% would require a gradual withdrawal of accommodation, so that the stimulus is reduced over time but does not suddenly disappear,” he said in a speech in Frankfurt.

The remarks on Wednesday appear to represent a fight back from the one of the Governing Council’s most prominent dovish policy makers after a series of hawkish comments seeking to drive more aggressive tightening.

While ECB officials have been debating how fast to begin rate increases, they are also now looking at how far they should continue raising. Panetta’s views contrast with those of President Christine Lagarde, who wrote earlier this week about the prospect of tightening toward a neutral level of borrowing costs that neither constricts nor stimulates the economy.

Bank of France Governor Francois Villeroy de Galhau, who has often been at the center of gravity in ECB debates, told Bloomberg Television Tuesday that “we should probably go to this neutral rate till next year” and said the question will then be whether to increase even further.

“Normalization is not the same thing as a neutral policy stance, which is when monetary policy is neither accommodative nor contractionary for the economy,” Panetta said. “A neutral stance allows the central bank to stabilize inflation around its target when output is at potential and when there are no transitory shocks disrupting the inflation path.”

Separately, Finnish policy maker Olli Rehn said the ECB should raise its rate by 0.25 percentage points in its July meeting to -0.25% and again to zero “as the autumn comes.”

Speaking on a webcast from the Finnish central bank’s Payments Forum, Rehn says ECB monetary policy normalization to be gradual given high degree of uncertainty in the economy as a result of Russia’s war in Ukraine.

“On the one hand we have to take into account factors affecting the fast acceleration of inflation and on the other hand the possible factors that could cause growth to ease quickly,” he said.