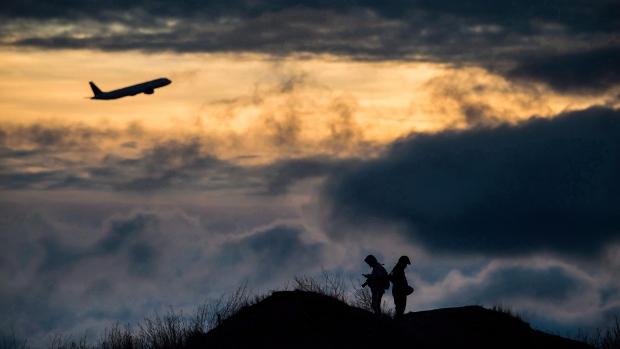 An Air Canada plane takes off as Andrew Yang, left, and Kevin Jiang take photographs of planes taking off and landing at Vancouver International Airport at sunset, in Richmond, B.C., on Sunday, Dec. 31, 2017. , THE CANADIAN PRESS/Darryl Dyck

MONTREAL -- Air Canada could face a boycott from Taiwanese travellers after the airline joined a growing list of air carriers that have reportedly bowed to Chinese pressure by listing the capital of Taiwan as a part of China on its booking website.

The Montreal-based airline started a route between Vancouver and Taipei last June. On Tuesday, its customer site listed flights to Taipei, CN, rather than to Taiwan, the self-ruled island that Beijing regards as Chinese territory.

In addition to referring to Taipei as part of China during the booking process, a page on Air Canada's website trumpeting new international destinations refers to Taipei, China.

However, Taiwan is still called a country in results from a web search of the route from Vancouver and on its flight timetable effective May 24 to Aug. 26.

China's Civil Aviation Administration has demanded the change from 36 foreign airlines, including some American carriers, according to the White House.

Malaysia Airlines and British Airways are among the carriers that have added CN to Taipei on its websites.

The government of Chinese President Xi Jinping has been increasingly assertive about its claims to Taiwan, which it regards as a renegade province and has threatened use military force to bring under its control.

Air Canada declined to respond to questions about the company's decision or whether the country affiliation had been recently changed, but published reports say the Chinese government wrote letters to several airlines requesting the change.

"Air Canada's policy is to comply with all requirements in all worldwide jurisdictions to which we fly," spokeswoman Isabelle Arthur said in a statement.

Canada's other major air carrier, WestJet Airlines, doesn't fly to Taiwan or mainland China and the destinations are not searchable on its website.

The president of the Taiwan Chamber of Commerce in B.C. said Tuesday he believes Air Canada agreed to make the change because the airline is eager to have new routes to China. Air Canada is in the process of negotiating a joint venture with Air China, which the Canadian airline said was expected to be completed in the spring.

"If they treat the Taiwan people so unfriendly I think most of the people from Taiwan will choose other carriers instead of Air Canada," said Charles Chang.

Chang, who is also general manager of Formosa Travel, said he believes Air Canada made the change one or two days ago. It is ridiculous that Air Canada refers to Taiwan in this way, he said, adding that he plans to send a letter of protest to the airline.

Delta Air Lines, hotel operator Marriott, fashion brand Zara and other companies have apologized to China for referring to Taiwan, Hong Kong, and Tibet as countries on websites or promotional material.

The U.S. clothing retailer Gap apologized Tuesday for selling T-shirts with a map of China that didn't include self-ruled Taiwan, the latest example of corporate kowtowing to Beijing.

The company took action after photos began circulating on Chinese social media of a T-shirt showing a map of China which appeared to omit Taiwan, southern Tibet and the disputed South China Sea, the state-owned Global Times said, adding that it drew hundreds of complaints on China's Weibo microblogging platform.

The White House has condemned China's efforts to control how U.S. airlines refer to Taiwan, Hong Kong and Macau, saying the push to make them comply with Chinese standards is "Orwellian nonsense."

China dismissed that criticism, saying companies operating in the country must respect its sovereignty.

Taiwan's Foreign Minister Joseph Wu told reporters that China pressuring companies like Gap to change how they refer to Taiwan was "rather unfortunate in terms of cross-strait relations" and would push its residents "further and further away" rather than winning their "hearts and minds."

-- With files from The Associated Press