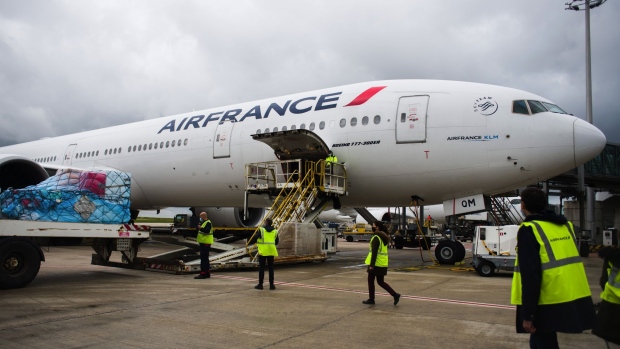 (Bloomberg) -- Air France-KLM is in talks with Apollo Global Management Inc. about a 500 million-euro ($528 million) capital injection that would allow the carrier to repay a chunk of the state aid that helped it survive the Covid crisis.

The funding would see the U.S. private-equity firm provide capital to an Air France affiliate that owns a pool of spare jetliner engines used in the Paris-based carrier’s maintenance operations, according to a statement Friday.

Air France-KLM has flagged plans for a 4 billion-euro capital increase as it seeks to repay debt in line with European Union requirements on state funding. The Apollo accord comes days after the company revealed that shipping giant CMA CGM SA aims to take a 9% stake as part of an air-cargo alliance.

Proceeds from the Apollo transaction would enable Air France-KLM to partially redeem French state perpetual bonds, according to the release, while also financing spare engines as part of the carrier’s fleet-renewal program.

Air France-KLM said in a May 5 earnings release that KLM had repaid 311 million euros of a Dutch state-backed revolving credit. It also hinted at the Apollo plan, saying it was making progress on refinancing 500 million euros of Air France assets to repay French aid, without naming the U.S. firm.