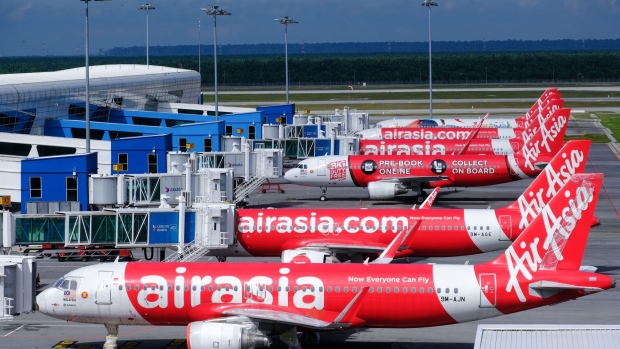 (Bloomberg) -- AirAsia Group Bhd. is seeking to raise as much as 2.5 billion ringgit ($600 million) by the end of the year as it tries to survive a business slump exacerbated by the coronavirus pandemic.

The Subang, Malaysia-based budget carrier may borrow up to 1.5 billion ringgit from banks and another 1 billion ringgit from investors, a spokeswoman said Tuesday. AirAsia is also in talks with local and foreign investors including private equity firms, strategic partners and conglomerates, she said, confirming an earlier report by Reuters that cited Group Chief Executive Officer Tony Fernandes.

Airlines around the world are losing money after grounding thousands of planes as countries shut borders and restrict people’s movements. AirAsia, which last month posted its largest quarterly loss on record, resumed domestic operations in late April but its long-haul unit, AirAsia X Bhd., still isn’t flying. Auditor Ernst & Young said in July their ability to continue as going concerns may be in “significant doubt.”

South Korea’s SK Group said in June that it was in talks to buy a small stake in AirAsia, without providing further details. AirAsia has also cut the salaries of management, trimmed jobs and deferred plane deliveries in an attempt to shave costs by 30% this year.

AirAsia is also evaluating its operations in Japan and will make a decision very soon, the company’s spokeswoman said Tuesday. Its India venture remains as is, she said without elaborating. The airline is looking to consolidate and strengthen its business in Southeast Asia, even if that means exiting Japan and India, Reuters reported earlier.

AirAsia X said last month that it needs to reach agreements with major creditors to restructure outstanding debt because it faces “severe liquidity constraints” that threaten its ability to resume flying and continue as a going concern.

The long-haul budget unit and its AAX Leasing Two Ltd. have received a claim from BOC Aviation Ltd. regarding $23 million of outstanding amounts due under lease agreements, according to an exchange filing Friday. AirAsia X, which said it is seeking legal advice, leases four aircraft from BOC.

AirAsia is one of Airbus SE’s major customers for A320s while AirAsia X is the world’s biggest customer of Airbus A330neo planes. AirAsia X has 78 of the aircraft on order, according to Airbus’s website, and has already deferred delivery of some A330neos.