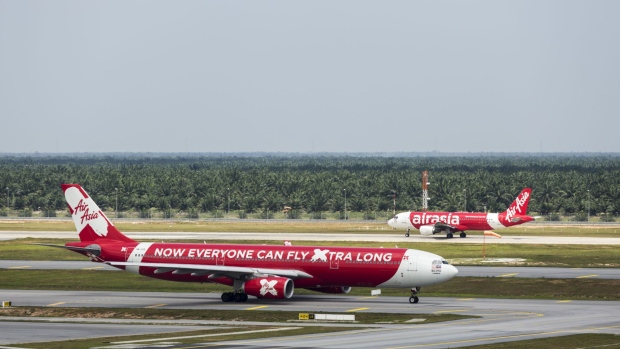 (Bloomberg) -- AirAsia Group Bhd.’s long-haul arm has offered to pay creditors just 0.5% of the more than $8 billion total debt they are owed and terminate all existing contracts as it tries to restructure, a document seen by Bloomberg shows.

The carrier, AirAsia X Bhd., told creditors it is unable to meet immediate debt and other financial commitments based on its financial position and industry outlook. The low-cost airline has barely flown in 19 months, since the early days of the Covid-19 pandemic.

Half of the 36.6 billion ringgit ($8.1 billion) liability is the cost of terminating orders with Airbus SE, its largest creditor, for 78 A330neo and 30 A321neo aircraft, according to the document.

“To avoid a liquidation and to allow the airline to fly again, the only option is for AAX to undertake the proposed debt restructuring, proposed corporate restructuring and proposed fundraising and update its business model to survive and thrive in the long term,” the airline said.

AirAsia X has set Nov. 12 for creditor meetings to vote on the restructuring proposal, according to an exchange filing. Reuters first reported on the proposed payment plan earlier Monday.

The carrier posted a record quarterly net loss of 24.6 billion ringgit in the three months ended June, mainly on provisions for the amount payable to creditors.