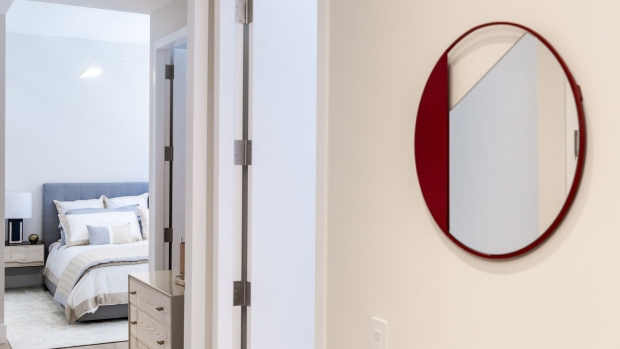 A mirror is displayed outside the bedroom of an apartment unit in the AvalonBay Communities Inc. Park Loggia condominium at 15 West 61 Street in New York, U.S., on Wednesday, May 15, 2019. AvalonBay Communities real estate investment trust acquired the site for the Park Loggia for $300 million, near the peak of Manhattan's high-end sales frenzy, with plans for luxury rentals and, perhaps, some condos. Since then, the borough has become saturated with both and AvalonBay decided the more-lucrative option was to go all-condo. Photographer: Mark Abramson/Bloomberg , Bloomberg

(Bloomberg) -- A corporate-housing startup backed by Airbnb Inc. has raised money at roughly half the valuation it commanded five months ago, as the coronavirus pandemic ravages the lodging industry.

Zeus Living Inc. raised about $15 million in equity and debt at a valuation of about $110 million from existing investors CEAS Investments I, Initialized Capital Management and Soros Fund Management, according to people familiar with the matter. It was worth about $205 million in a funding round in December, said the people, who asked to not be identified because the matter isn’t public.

Zeus raised the money in part because it didn’t have enough cash to comply with a covenant tied to a loan from Soros, the people said.

The valuation, which includes the amount invested, is about half of where it was last year. Zeus is far from alone as far as revamped valuations go. Airbnb last month raised debt and equity from investors including Silver Lake and Sixth Street Partners at an implied valuation of $18 billion, down from its $31 billion peak.

Zeus, led by Chief Executive Officer Kulveer Taggar, is like an Airbnb for white-collar workers. The San Francisco-based company helps landlords furnish their homes and offers them to individuals as well as employees of large companies who need temporary housing for a month or more.

Airbnb participated in Zeus’s fundraising in December but wasn’t involved in the latest round, some of the people said.

With corporate travel depressed, Zeus has rented some of its more than 2,000 homes to health-care workers and people escaping densely populated cities, according to the people familiar with the matter. Its occupancy rate is tracking higher than 70% so far this month, with large technology companies maintaining their contracts with the company, one of the people said.

Its corporate partners have included GitHub Inc., Samsara Networks Inc., Willkie Farr & Gallagher and ServiceTitan Inc., according to its website.

But like many startups impacted by the pandemic, Zeus has laid off employees, cutting some 80 workers, or 30% of its staff, in March, the people said.

Delray Beach, Florida-based CEAS shares an address with the philanthropic foundation of billionaire Leslie L Alexander, the former owner of the Houston Rockets. Soros Fund Management is the family office of billionaire George Soros and San Francisco-based Initialized is a firm co-founded by venture capitalists Alexis Ohanian and Garry Tan.