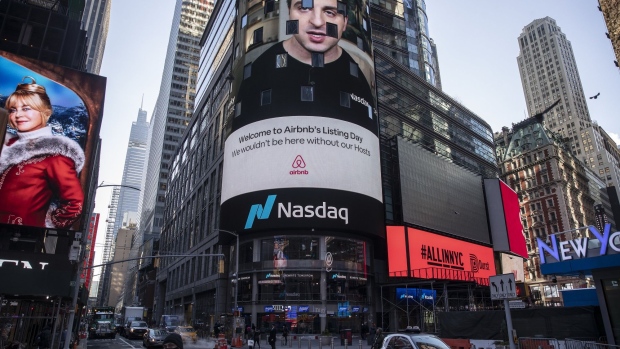 Brian Chesky, co-founder and chief executive officer of Airbnb Inc., speaks virtually during the company's initial public offering (IPO) at the Nasdaq MarketSite in New York, U.S., on Thursday, Dec. 10, 2020. Airbnb Inc. priced its long-awaited initial public offering above a marketed range to raise about $3.5 billion, seizing on investor demand for a home-rental business roaring back from a pandemic-fueled slump. , Bloomberg

Airbnb Inc. and DoorDash Inc. have an analyst advocating for both firms after strong trading debuts last week.

Shyam Patil at Susquehanna Financial Group initiated coverage on both companies with buy-equivalent ratings and 12-month share price targets that are the highest among Wall Street firms covering the stock, according to data compiled by Bloomberg.

The firm issued price targets of US$180 for Airbnb and US$185 for DoorDash, citing their market dominance in their respective industries. The bullish initiation comes one day after short-seller Citron Research slammed DoorDash’s IPO as the “most ridiculous” of the year, and called it grossly overvalued.

Airbnb gained as much as 8.1 per cent to US$159 on Friday, while DoorDash erased an initial decline to rise as much as 6.9 per cent.

Both stocks have been strong performers since they went public earlier this month. Airbnb started trading last week and has jumped about 130 per cent to reach a market capitalization of US$94 billion. DoorDash is up about 60 per cent after going public on Dec. 9, resulting in a market value above US$50 billion.

Airbnb is the clear leader in the short-term rental market and its brand strength should give it an advantage in both traffic and supply, Patil wrote in a report. It has created a “powerful flywheel” as it generates revenue from both guests of rental homes and the hosts of those residences, giving it an “unparalleled” trait within the online travel industry.

He sees DoorDash as the dominant player in the food-delivery business and having advantages despite heightened competition. The company is well positioned to expand into the on-demand delivery of other product categories, such as grocery, and this should support revenue growth and margins, Patil wrote.

According to data compiled by Bloomberg, Airbnb has three buy ratings, one hold, and two sells, with the average price target at about US$111, which implies a downside of nearly 30 per cent. For DoorDash, two firms tracked by Bloomberg recommend buying shares while three have hold recommendations. The average price target is US$155, or roughly where the stock last closed.