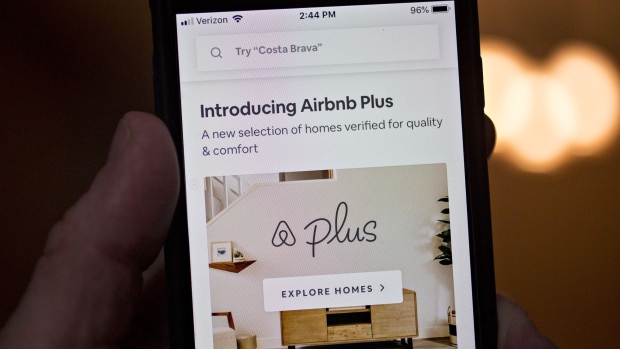 The Airbnb Inc. application is displayed on an Apple Inc. iPhone in an arranged photograph taken in Arlington, Virginia, U.S., on Friday, March 8, 2019. Airbnb agreed to buy HotelTonight, its biggest acquisition yet, in a move to increase hotel listings on the site ahead of an eventual initial public offering for the home-sharing startup. Photographer: Andrew Harrer/Bloomberg , Bloomberg

(Bloomberg) -- Airbnb Inc. is in talks with investors to take on as much as $1 billion in additional debt after announcing a $1 billion debt and equity deal Monday, according to people familiar with the matter.

The travel platform company announced Monday that it was raising $1 billion in debt and equity from Silver Lake and Sixth Street Partners. The company is in talks to raise $500 million to $1 billion more by either issuing first-lien debt or a convertible note or selling an equity stake, said the people, who asked not to be identified because the information wasn’t public.

Airbnb hasn’t disclosed the terms of its deal with Silver Lake and Sixth Street Partners. People familiar with the matter have said that the transaction was comprised of second lien debt, along with warrants for about 1% of the company’s equity. The deal carried an 11% to 12% interest rate, the people said.

The new deal will also likely consist of different types of debt and could carry a similar interest rate, though it isn’t expected to include warrants, the people said.

The deal announced Monday was meant to help the home-sharing company weather the coronavirus pandemic that is devastating the global travel industry, Airbnb said in a statement.

“The new resources will support Airbnb’s ongoing work to invest over the long term in its community of hosts who share their homes and experiences, as well as the work to serve all stakeholders in the Airbnb community,” the company said.