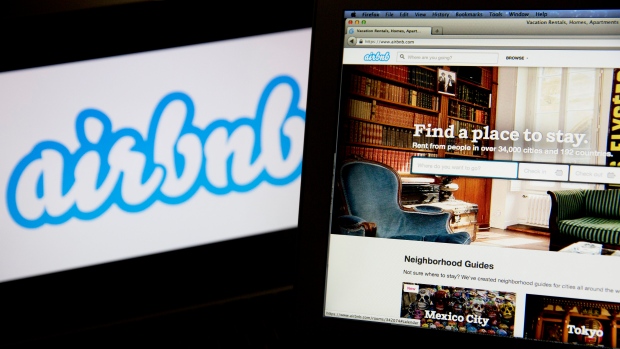 The Airbnb Inc. logo and website are displayed on laptop computers in this arranged photograph in Washington, D.C., March 21, 2014 , Bloomberg/Andrew Harrer

Airbnb Inc. beat analysts’ estimates for bookings in the first quarter, reflecting pent-up demand for travel after a year of COVID-19 restrictions. But the lingering effects of the pandemic could still be seen as the company’s loss ballooned, a result of repayment of debt it took on during the height of the crisis.

The San Francisco-based company, which went public in December, reported US$10.3 billion in gross bookings in the three months ended March 31, a 52 per cent increase from the year earlier period and well beyond the US$7.57 billion analysts’ had predicted. Revenue rose 5 per cent to US$887 million, also beating analyst’s projections.

“While conditions aren’t yet normal, they are improving, and we expect a travel rebound unlike anything we have seen before,” the company wrote in a letter to shareholders accompanying the results. Airbnb didn’t release an official outlook for the current period, citing ongoing impacts of COVID-19, but said it expects gross bookings to be higher than 2019 levels and that April trends improved from March.

“We were not expecting gross booking value to be quite as strong as it was,” Airbnb Chief Executive Officer Brian Chesky said in an interview on Bloomberg Television after the results were published. “We were expecting a strong quarter, but a travel company to actually grow in the midst of a pandemic that certainly was a pretty good scenario for us.”

When people in the U.S. older than 60 became eligible for vaccinations earlier this year, Airbnb saw bookings for that age group jump 60 per cent, Chesky said, adding the upcoming travel rebound will be “unlike anything you’ve seen in a century.”

Airbnb’s shares fluctuated in extended trading after closing down 3.2 per cent in New York at US$135.75.

The surprisingly positive results reflect a big upswing from a year ago, when Airbnb’s bookings plunged 80 per cent after the coronavirus shut down most of the world. Travel was one of the hardest hit sectors of the economy in the pandemic, but Airbnb saw a swifter recovery than its peers when urbanites started abandoning their city apartments in favor of longer stays in rural rentals. Domestic leisure travel has continued to increase this year as vaccination rates have climbed in the U.S., with some analysts expecting Airbnb to see bookings return to pre-pandemic levels by summer. “We want to see if we are moving toward post-pandemic normalcy,” Ivan Feinseth, an analyst at Tigress Financial Partners, said in an interview before results were released.

Prior to the pandemic, alternative accommodation, or non-hotel type lodgings that Airbnb specializes in, was already the fastest growing segment of the travel market and it’s now leading the rebound. Last week, Booking Holdings Inc. and Expedia Group Inc. reported better-than-expected first-quarter results, buoyed by vacation home-rental demand in the U.S. Both online travel agents said they would be trying to expand their property inventory in the U.S. to take on Airbnb in the peak summer season. Booking’s quarterly revenue declined 50 per cent while Expedia’s was down 44 per cent compared with a year earlier.

Airbnb is fighting to retain its top position. In February, the company launched its biggest marketing campaign in five years in a bid to recruit more hosts and said it’s already driving new customers to its platform. Later this month, Airbnb will be unveiling a platform upgrade, which promises to streamline the process to become a host.

Almost 60 per cent of Airbnb’s revenue came from the U.S., where vaccines are now widely available, the company said. Guests are taking advantage of remote work policies and choosing to travel to non-urban areas and stay for longer: Nearly a quarter of Airbnb’s bookings in the first quarter were for stays longer than 28 days, an increase of 14 per cent from 2019. Bookings in North America, primarily the U.S., increased to levels above 2019 in the first quarter, the company said.

However, other countries are still struggling to contain COVID-19. India is reporting 4,000 deaths a day, meanwhile Europe’s vaccine rollout is lagging the U.S. and Australia has said its borders may be closed to international travelers for another year. As countries like the U.K. and France have announced reopenings and eased restrictions, Airbnb has seen a sharp increase in bookings, the company said. “We anticipate the pace of recovery in Europe will continue to be heavily influenced by the severity and duration of travel restrictions, but believe we are well positioned to take advantage of the recovery as they ease,” the company said.

Releasing its financial results for the second time as a public company, Airbnb reported net loss of US$1.17 billion, or US$1.95 a share, significantly higher than the loss of US$341 million a year earlier. Airbnb said it was due to the repayment of debt the company took on during the pandemic. In April 2020, Airbnb lined up about US$2 billion in debt financing to help it grow and pay bills while travel demand was crushed.