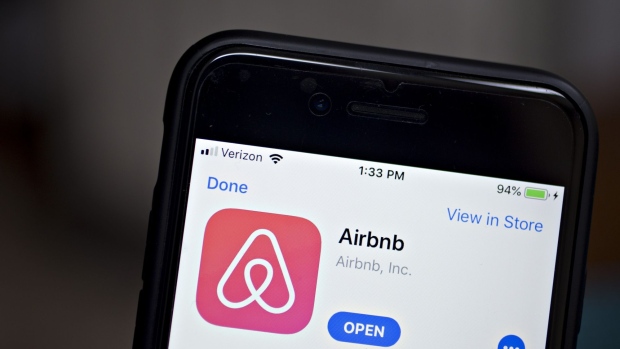 The Airbnb Inc. application is displayed in the App Store on an Apple Inc. iPhone in an arranged photograph taken in Arlington, Virginia, U.S., on Friday, March 8, 2019. Airbnb agreed to buy HotelTonight, its biggest acquisition yet, in a move to increase hotel listings on the site ahead of an eventual initial public offering for the home-sharing startup. Photographer: Andrew Harrer/Bloomberg , Bloomberg

(Bloomberg) -- Airbnb Inc. is splitting its privately held shares ahead of a planned initial public offering, according to an email reviewed by Bloomberg News.

The company said in an email to some of its shareholders that the board of directors has approved a two-for-one split of the shares. The split will be reflected in their accounts on Tuesday, according to the email.

After the split, the company’s shares are valued at $34.88 apiece, according to the email.

A representative for San Francisco-based Airbnb declined to comment.

Airbnb is planning to go public later this year. A two-for-one stock split reduces the price of the shares for IPO investors, while doubling the shares of current holders so the value of their holdings stays the same. The market value of the total number of shares in a stock split is unchanged.