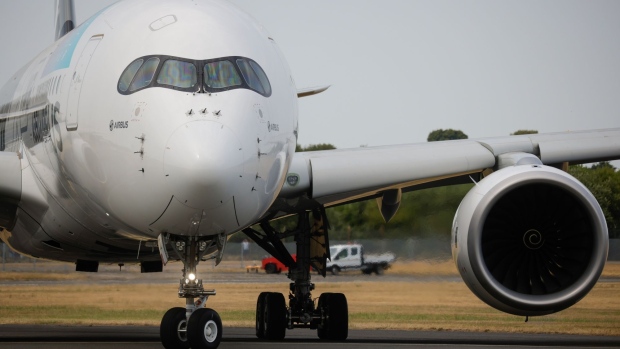 An Airbus SE A350 aircraft on the opening day of the Farnborough International Airshow in Farnborough, UK, on Monday, July 18, 2022. The airshow, one of the biggest events in the global aerospace industry, runs through July 22. , Bloomberg

The deal was approved Wednesday by Judge Stephane Noel during a court hearing in Paris. Financial prosecutor Stéphanie Paget said that the punitive nature of the record fine in the prior Airbus settlement explained why the Parquet National Financier sought a much more modest penalty, which corresponds to amounts paid by the planemaker to intermediaries in the Kazakh and Libyan cases.

PNF boss Jean-Francois Bohnert added that while the allegations in both settlements took place “over the same period and according to the same fraudulent scheme,” all issues couldn’t be dealt with simultaneously for procedural reasons. Under the terms of the agreement, the plane maker made no admission of guilt.

“Airbus was already heavily penalized in 2020 by paying a significant fine,” Airbus General Counsel John Harrison said in court. “These behaviors are now a thing of the past and Airbus is today a company that has been profoundly transformed.”

The settlement finally brings closure to Airbus after years of investigations into accusations that it used middle men to win over officials with bribes when it entered new markets. The probes culminated in the record coordinated resolution with French, British and American authorities in January 2020.

The cases focused on the role of a now-defunct 150-person strategy and marketing department at Airbus.

At the heart of the Kazakh case is a payment of nearly €10 million euros to an intermediary involved a deal announced more than a decade ago for the provision of helicopters and two satellites.

The Libyan matter revolves around the sale of 12 commercial aircraft and payments of €6 million that Airbus made to two intermediaries with ties to the late Moammar Al Qaddafi. As part of that probe, former French president Nicolas Sarkozy has been charged over suspicions he received covert Libyan funding for his winning 2007 presidential campaign. He denies the allegations.