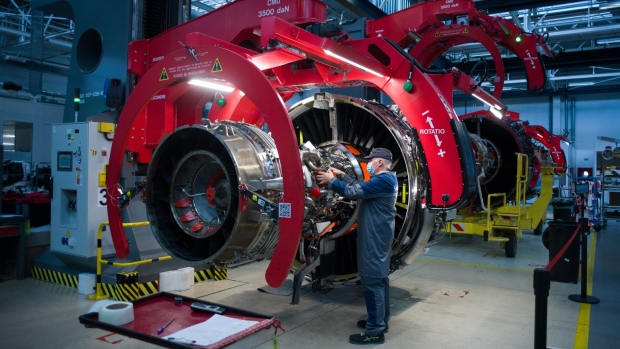 (Bloomberg) -- Airbus SE is working with engine makers to scale up production as the planemaker prepares to increase output of its top-selling A320-series jets in the second half of this year and beyond.

Safran SA, which makes engines with General Electric Co., is getting ready for a strong pick-up starting next year, Chief Executive Officer Oliver Andries said on a conference call Friday.

As output gains pace for A320s and Boeing Co.’s 737 Max models, Safran executives warned there could be “typical’ bottlenecks in supplies such as parts that need to be forged and cast. Its CFM International venture with GE makes engines for both single-aisle jets.

The remarks come a day after Airbus reiterated a target to raise A320-series output later this year, saying it’s preparing for a “steep” ramp-up in 2022 and 2023. On a call, executives for the European planemaker said they’re analyzing the supply chain with special attention to engines, where some parts “are always at the edge.”

Engine supplies were a limiting factor for Airbus before the coronavirus pandemic hit demand, and executives at the Toulouse, France-based planemaker said it was premature to assume that those pressures won’t reappear once activity picks up again.

“The ramp-up could be strong in 2022 and beyond,” he said. “The supply chain was weakened by Covid and there was restructuring. We’re getting ready, working with our suppliers to see how they are getting prepared, it’s an issue that merits our attention.”

Safran has had talks with Airbus about a push in engine performance required for the A321XLR, Andries said, adding that the Leap engine fit the long-range variant well. The CFM Leap turbine is one of two power plants offered for the A320neo family. The other is made by Raytheon Technologies Corp.’s Pratt & Whitney unit.

The comments suggest airlines are incorporating the still-to-be-certified XLR in their future route planning. The variant will allow airlines to fly routes traditionally reserved for larger and less fuel-efficient wide-body jets. The fast-selling model is due to make its debut in 2023.

Read: Airbus Is Aiming to Seize the Skies From Problem-Plagued Boeing

About two dozen operators have ordered the XLR, including American Airlines Group Inc., United Airlines Holdings Inc., JetBlue Airways Corp. and Frontier Group Holdings Inc. They plan to use the planes on trans-Atlantic or long-distance U.S. routes, such as to Hawaii. Last week, Delta Air Lines Inc. ordered an additional 25 A321neos, without specifying whether they were long-range variants.

Safran on Friday also pointed to a new order during the most recent quarter for business-class seats for the XLR from a major U.S. carrier it didn’t name. Along with engines, Safran makes airplane interiors and other components.