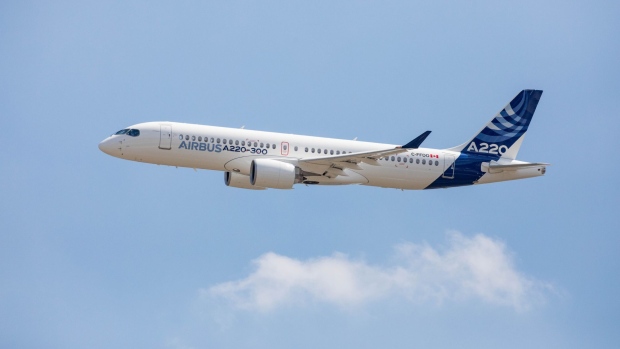 A new Airbus A220 single-aisle aircraft comes in to land in Toulouse, France, on Tuesday, July 10, 2018. Airbus renamed the C Series jet acquired from Bombardier Inc. the A220 and set a target of at least 100 orders for the aircraft this year. , Bloomberg

(Bloomberg) -- Airbus SE is seeking to spur demand for its smallest jetliner by pitching the A220 model as a tool for cutting costs and trimming capacity in the post-coronavirus travel market.

The European company, which took control of the former Bombardier Inc. jet in 2018, is also promoting its ability to fulfill multiple roles spanning short hops between cities to longer trips on routes with limited demand, Antonio Da Costa, Airbus’s marketing chief for single-aisle planes, said in an interview.

“We can’t say we’re in a seller’s market, but we do see good prospects,” he said. “The A220 is well placed because it offers low operating costs, a flexible platform for long and short missions, and is building on a good market basis.”

The A220 suffered a setback this week when Air Canada canceled 12 of its 45 total orders and deferred 18 planes. At the same time, almost 100% of the current A220 fleet has returned to service, a figure that’s ahead of other models, according to the executive. Many operated even at the height of lockdowns in the spring and summer when global fleets were largely grounded.

“In a pandemic airlines go for the most efficient, lowest cost,” Da Costa said. “This was the aircraft of choice, it was flying around most of the time.”

Latvia-based Air Baltic Corp., the launch customer for the A220 -- then the C Series -- in 2016, responded to the crisis by saying it would retire all other aircraft and become the first carrier in the world to operate only that model.

While the focus is on securing deliveries of the 507 aircraft in the A220 backlog, Da Costa said Airbus is talking with airlines about new orders for the jet, which comes in two versions, one seating up to 120 people and the other as many as 150, with a range of almost 6,400 kilometers (3,977 miles).

Southwest Airlines Co. Chief Executive Officer Gary Kelly said last month that weak demand for flights would make it easier to add the Airbus A220 should the carrier opt to diversify from its all Boeing Co. 737 fleet.

The smaller city pairs that the A220 has served -- such as Geneva-London with Deutsche Lufthansa AG’s Swiss arm and New York-Boston with Delta Air Lines Inc. -- have seen traffic dwindle, but given time such routes should revive and A220 demand recover, said Sandy Morris, an analyst at Jefferies International.

Airlines may also be keen to have a smaller plane in their fleets that they can draft in to replace larger single-aisle models such as the Airbus A320 and A321 as demand fluctuates with continuing outbreaks of the virus, Morris said.

Airbus pitched the A220 as complementing its existing narrow-body family when it bought the model from Bombardier, and Da Costa said that 70% of large airline customers for the A220 also have the A320-series in their lineup.

Still, the company has put plans to boost production on hold given current volatility, he said, and will limit A220 output to three a month at the main Mirabel site in Canada and one in Mobile, Alabama. Increases had been planned as part of moves to lift output at the plants to 10 and four a month respectively by the middle of the decade.

On a possible stretch version of the A220-300 seating 160 people or more, in which airlines including Air France-KLM have expressed an interest, Da Costa said the focus is on the current line-up, though the model has “oodles” of development potential.