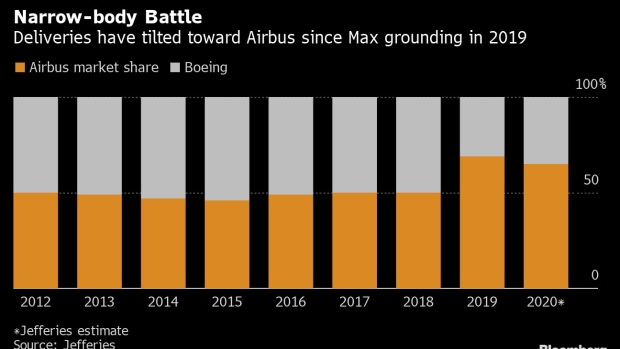 (Bloomberg) -- As Airbus SE picks its way through the most sweeping upheaval to ever hit the aircraft market, its progress will be measured through the A320 series narrow-body, the world’s best-selling jetliner.

The European planemaker, which slashed production rates by a third across its lineup on Wednesday, reckons global airline fleets can absorb 40 of the workhorse A320neo and its variants each month. Chief Executive Officer Guillaume Faury has said the backlog of more than 6,000 A320 orders can serve as a “shock absorber” to cushion against the abrupt fall-off in demand caused by the coronavirus.

“What will matter for us is the shape and speed of the recovery, in particular the single aisle in 2021 and beyond,” Faury said Wednesday. “Whether it’s a V-shaped recovery or an L-shaped recovery.”

With long-distance flight demand likely to take longer to return, the market for single-aisle jets will probably recover faster than larger twin-aisles. In March, Airbus was able to deliver 30 A320-series planes, which are typically used for shorter hops within Europe, Asia and the U.S. The world’s largest planemaker has also been selling long-distance variants that airlines could find useful when travel resumes, with longer routes facing less demand than before.

Analysts say Airbus looks to be better positioned in the narrow-body marketplace than Boeing Co., its only peer in the global duopoly for aircraft sales. The Chicago-based company’s 737 Max remains grounded more than a year after two fatal crashes. Boeing has stuck with a forecast for a mid-year return to service for the Max, even as the coronavirus crisis has slowed work toward recertification and new issues with software have cropped up.

The U.S. company has yet to adjust its own production rate but is due to announce monthly order and delivery figures next week. All of Boeing’s jet assembly lines are currently suspended, and analysts expect the company to slash wide-body production as Airbus did.

“Covid-19 makes what was already a very difficult situation for Boeing worse with the 737 Max, as the return to service would need many hours of flying to reassure the public,” said industry consultant Mark Martin. “Airlines might not want to take delivery if they feel that in a tough environment, the Max will make it even more difficult to operate the aircraft.”

Sheila Kahyaoglu, an analyst with Jefferies, expects Boeing to build an average of 27 Max aircraft per month once production resumes, and to deliver 35 a month, including from inventory. If Airbus can hold to 40 A320-series per month, the European planemaker will cement its narrow-body lead at about 55%-45% through 2023, she estimates. The 737 was roughly even with the A320-series before the Max’s global grounding in March 2019.

Both airframers face challenges with customers that, with few exceptions, are seeking to defer, delay or cancel orders altogether. EasyJet Plc said Thursday it had reached an agreement to defer 24 A320-family aircraft that were due to be delivered over three years. As a result, the discount carrier won’t take any new planes in 2021.

Last week, leasing customer Avolon Holdings Ltd. pushed back the handovers of nine A320-family jets to 2027, while slashing a 737 Max order by 75 planes. Airbus saw nine cancellations of A320 series planes in total in March.

Faury warned on Wednesday that the coronavirus epidemic is likely to be a long-lasting crisis for the aviation industry, and said he’d review production goals each month. He said he aims to preserve the balance sheet while keeping suppliers and employees working, and also addressing the needs of customers.

“Narrow bodies may recover faster from the crisis than widebodies but the recovery will still be slow, and could take as long as the first half of 2021,” said Martin.