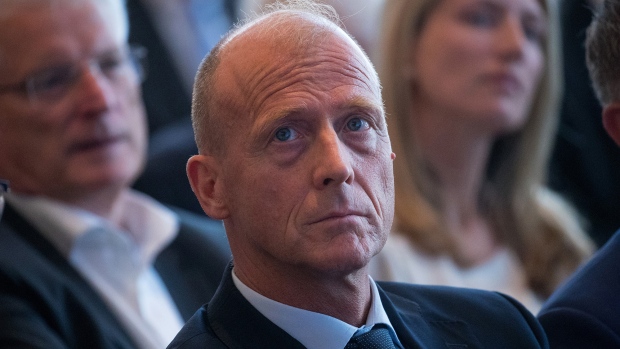 Tom Enders, chief executive officer of Airbus SE, sits in the audience during the European School of Management and Technology (ESMT) forum in Berlin, Germany, on Thursday, June 7, 2018. , Krisztian Bocsi/Bloomberg

Airbus SE said it could be forced to move future investments out of the U.K. in case of a no-deal divorce from the European Union, slamming the “madness” of Brexit supporters who assume the planemaker won’t abandon Britain.

“If there is a no-deal Brexit, we at Airbus will have to make potentially very harmful decisions for the U.K.,” said Chief Executive Officer Tom Enders, who has been one of the most outspoken business leaders on the topic. “Please don’t listen to the Brexiteers’ madness which asserts that, because we have huge plants here, we will not move and we will always be here. They are wrong.”

The comments, made in an unusual video message shared by the company Thursday, are the strongest yet since the 2016 referendum from the executive who has repeatedly warned of the fallout from a worst-case Brexit scenario. It ramps up pressure on Theresa May, the British prime minister caught in the crossfire between pro-EU members of her Conservative Party who are seeking to force her to postpone the March 29 Brexit deadline, and staunch euroskeptics who are threatening to bring down her government if she does.

Airbus, which is based in Toulouse, France, directly employs 14,000 people in the U.K. and supports another 110,000, Enders said in the video posted Thursday. The company has production sites in Filton, in the southwest of England, and in Wales where it manufactures wings for its range of commercial aircraft.

Time for reaching a decision on Brexit is running out. If the U.K. can’t agree to a deal in the next nine weeks, the country will leave the EU in a disorderly split that British authorities warn will risk a recession, and a hit to the pound of as much as 25 per cent. Next week Parliament is slated to vote on a series of options for Brexit’s next steps, including a proposal to force the government to ask the EU to extend the deadline.

Senior figures in the French and German governments said they’d be open to agreeing to such a request, signaling receding risk of a no-deal Brexit.

“It is a disgrace that more than two years after the result of the 2016 referendum, businesses are still unable to plan properly for the future,” Enders said. “If you are really sure that Brexit is best for Britain, come together and deliver a pragmatic withdrawal agreement.”

While the squabbling lawmakers can’t agree on a model for Brexit, many finance firms are moving money out of the City of London, a shift that may be irreversible. Five of the largest banks looking to serve continental European customers intend to move 750 billion euros ($854 billion) of assets to Frankfurt.

The planemaker has meanwhile been stockpiling parts at its plants in the U.K. and Germany to try to blunt any immediate impact of the hard borders that a no-deal Brexit would impose. The company has said that while it expects to have enough stock to cover production for one month, it can’t be fully prepared.

While the scale of Airbus’s plants won’t allow it to immediately vacate the U.K., the manufacturer “could be forced to re-direct future investments” if the parliament doesn’t avoid a no-deal exit that risks blocking up borders, restricting movement of workers and delaying its just-in-time production line.

“Make no mistake, there are plenty of countries out there who would love to build the wings for Airbus aircraft,” Enders said.