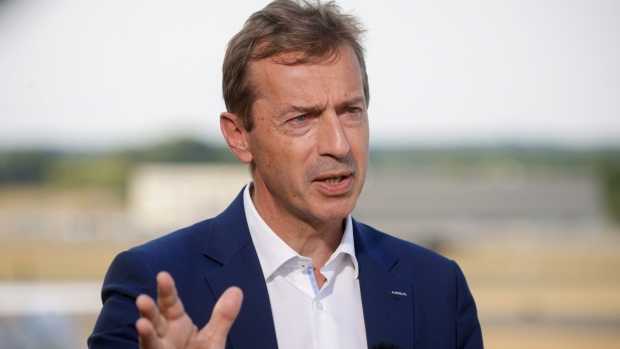 Guillaume Faury, chief executive officer of Airbus SE, Bloomberg Television interview on the opening day of the Farnborough International Airshow in Farnborough, UK, on Monday, July 18, 2022. The airshow, one of the biggest events in the global aerospace industry, runs through July 22. , Bloomberg

(Bloomberg) -- Airbus SE said production concerns have shifted from a shortage of jet engines to smaller suppliers struggling to cope with spiraling energy costs, with the squeeze expected to become most acute next spring.

The world’s largest planemaker is working to mitigate the impact of the energy crisis for component makers by being flexible with its aircraft production sequencing and supporting vendors seeking to raise working capital from banks, Chief Executive Officer Guillaume Faury said in an interview Monday.

“We have new issues coming from the energy situation, the prices of gas and electricity that are impacting small suppliers,” Faury said. “That’s a bit of a different nature and this will not impact the production before maybe the second quarter of next year.”

Airbus has struggled with supply-chain constraints since it began lifting output following factory shutdowns at the height of the coronavirus crisis. Hundreds of small firms it relies on face recruitment issues and raw materials shortages even as the manufacturing giant seeks to accelerate build rates to record levels over coming years.

Increased power prices following Russia’s invasion of Ukraine have added to the problems. Germany, one of the locations where Airbus makes its workhorse A320-series narrow-body family, is among countries hardest hit as Moscow squeezes gas supplies.

Faury, who cut the full-year delivery goal from 720 to 700 planes in July, said the company now expects to hand over “around 700” this year, indicating the difficulties of reaching even a revised target that requires more than 200 planes to be shipped in the final two months of the year.

Beyond that, he said there’s time to ensure that the energy squeeze doesn’t result in a further drag on build rates.

“There are a lot of moving parts and we need to anticipate as good as we can to find solutions before the problems hits the final assembly line,” the CEO said on Bloomberg Television in Berlin.

Faury said that Airbus is in contact with customers and partners in China as deteriorating political relations between Beijing and the West create uncertainty at an industrial level.

The European planemaker is anxious to maintain its 50% market share in China, which accounts for one in five of all aircraft sold worldwide, as well as production facilities in the city of Tianjin.

“We are not naive,” Faury said. “We see the way the world is evolving and the challenges of making business between China and the West. We need to make sure we are less exposed to risks of a geopolitical nature, because we see the way the tensions are rising.”

Joe Biden and Xi Jinping concluded the first in-person meeting between US and Chinese leaders since the pandemic began on Monday, with both calling for reduced tensions. The White House said Secretary of State Antony Blinken would travel to China, in a sign of a possible thaw in relations.

Among other issues covered by Faury in the interview were: