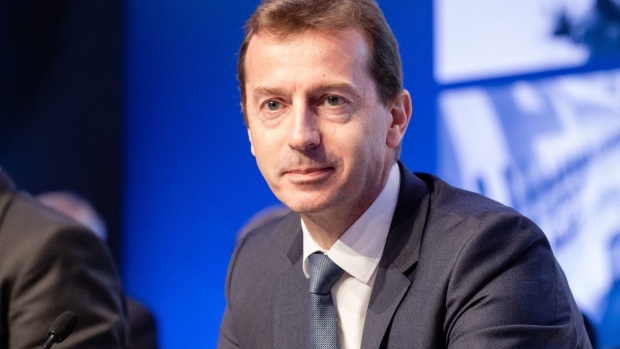 Guillaume Faury, chief executive officer of Airbus SE, looks on during the Airbus SE annual general meeting in Amsterdam, Netherlands, on Wednesday, April 10, 2019. U.S. President Donald Trump's administration is proposing tariffs on some $11 billion in imports from the European Union in response to harm the U.S. says is being caused by the bloc's subsidies to Boeing Co. rival Airbus. Photographer Marlene Awaad/Bloomberg , Bloomberg

(Bloomberg) -- Airbus SE Chief Executive Officer Guillaume Faury said a U.K. split from the European Union without a trade deal could threaten the planemaker’s investment plans in the country.

Future decisions would be made based on how easy it is to conduct business after Brexit, the CEO said in an interview with BNN Bloomberg on Monday. In the meantime, the company has no plans to close or scale down its British factories and would find a way to manage a no-deal scenario if it came to that, he said.

“In the short term we’re not in a position where we have to make decisions -- the plant and the activities which are in the U.K. are performing,” Faury said in Montreal. “I’m looking at the long-term situation and whether it will remain competitive for us to do business in the same way.”

Airbus was vehemently opposed to Brexit under previous CEO Tom Enders, who warned that the company could pull out of the U.K. if a deal wasn’t reached. Faury has taken a more measured tone since taking over in April 2019, while stockpiling parts to protect against border delays and taking steps to move British design certification for aircraft parts to the EU.

“It will be much better for the EU and the U.K. to have an orderly Brexit with a deal,” Faury said. “This being said, if there’s no deal we’ll have to live with it.”

Airbus employs 12,500 people in the U.K., according to its website, at sites including a wing-design site in Filton, near Bristol, and a wing-assembly plant in the Welsh town of Broughton.

Airbus has been mulling moves to lift build rates for its single-aisle A320 model to as high as 47 a month from 40 now in the second half of 2021, though the CEO said Monday current levels will remain in place at the start of next year. The jet-making industry is just starting to emerge from the crisis brought about by the coronavirus, which grounded planes worldwide and forced carriers to postpone deliveries.