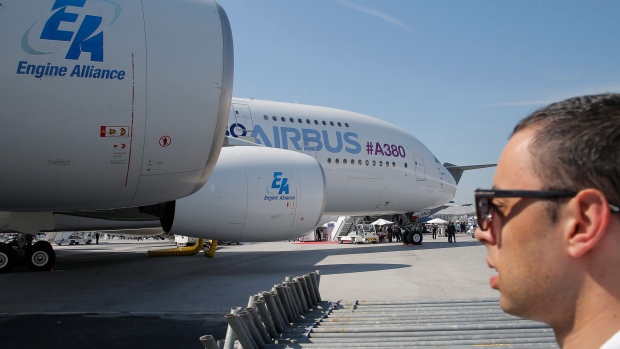 A man looks at a Airbus A380 at Paris Air Show, in Le Bourget, east of Paris, France, Tuesday, June 20 , AP Photo/Michel Euler

Boeing (BA.N) won a race for new business at the Paris Airshow, rolling out a new model of its best-selling 737 airliner that helped it claim back the order crown from rival Airbus.

After a show in which both manufacturers did brisk business under a sweltering sun, the European planemaker said on Thursday it had won 346 net new orders and commitments - including a last-minute order for 20 - while U.S. rival Boeing reached 571.

That included 147 new orders and commitments for the new Boeing 737 MAX 10, plus 214 conversions to the MAX 10 from other models to support the launch of the new plane.

"The MAX stole the show," Ihssane Mounir, vice president of sales and marketing at Boeing's commercial aircraft division, said. "This is probably one of our busiest air shows."

Combined orders were stronger than expected and edged past the total from the same show two years ago, but were well below a 2011 order blowout when Airbus alone managed a similar tally.

Asked if Airbus had lost momentum after years in which it often trounced Boeing at annual industry gatherings, sales chief John Leahy said the slowdown in orders had been expected.

"Is this a slower show than previous years? Yes, it is. Are we conceding that Boeing sold a few more airplanes than we did? Yes," he told a news conference.

In a late flurry on Thursday morning, Airbus signed deals for almost 100 aircraft, with AirAsia and Iranian carriers Zagros Airlines and Iran Airtours. It later added a last-minute Tibetan order for 20 aircraft.

Iranian Roads and Urban Development Minister Abbas Akhoundi toured the show and met suppliers on Thursday in a reminder of Iran's return to the aviation market after sanctions were lifted last year under a deal between Tehran and major powers.

Boeing topped up its tally by announcing a firm order for 125 737 MAX 8 airplanes with an undisclosed customer and another deal with lessor AerCap <AER.N> to convert 15 of its MAX 8 orders into the larger MAX 10.

It also added a memorandum of understanding from Chinese domestic Ruili Airlines for 20 737 MAX 8 aircraft.

Analyst Richard Aboulafia, of Virginia-based Teal Group, said commercial activity had been better than expected and was reminiscent of shows in 2009 and 2011, when the aircraft industry had generally bucked a retreating world economy.

"This time we've got instability and uncertainty in many regions of the world, but airline traffic is strong, and as we've seen at this show, airlines want jets and the finance people are certainly happy to help."

The A321 is larger than any previous member of the 737 family, an important gap in the minds of some airlines that the larger-capacity MAX 10 is intended to address.

Leahy, speaking at his last big air show before retiring later this year, said he had expected the new Boeing plane to make more of a splash.

"We had expected they would have had a bigger launch on the 737 MAX 10, not quite as many conversions, more incremental orders,"

But Mounir said converting existing orders to the new model was the most efficient way for airlines to secure attractive early delivery slots once the plane enters service in 2020.

"This is just the beginning. This is one week's worth of commitments," he told Reuters.

While he did not expect the MAX 10 to be a viable competitor to the A321, Leahy said its launch could result in price pressure. "They're clearly going to come after us on price."

Both firms accuse each other of heavy discounting to win deals.