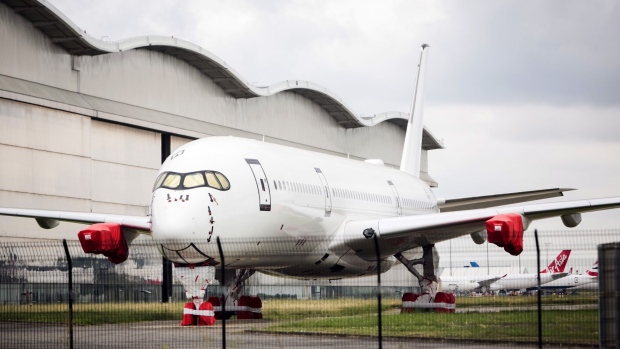 An unbranded Airbus A350 passenger aircraft outside the Airbus SE factory in Toulouse, France, on Wednesday, July 28, 2021. Airbus reports half year earnings on July 29. , Bloomberg

(Bloomberg) -- Airbus SE abandoned its delivery target for this year after supply-chain disruptions ripping through the industry proved too severe to overcome for the world’s biggest planemaker.

The European manufacturer moved away from a goal to hand over 700 planes, while saying that it won’t fall “materially short” of the guidance. As of the end of November, Airbus had handed over 565 units, with 68 delivered last month alone.

Deliveries usually accelerate significantly in the final stretch of a year, giving Airbus some hope of coming at least close to its goal.

It’s the second time this year that Airbus has lowered the target, after originally projecting 720 handovers before cutting the guidance in July. The aviation industry has been beset by parts shortages on everything from small components to engines. The crisis has been compounded by soaring energy prices squeezing suppliers, and Chief Executive Officer Guillaume Faury cautioned last week that there’s unlikely to be any improvement until the end of next year.

Supply constraints also mean that Airbus will adjust the speed of production-rate increase on its bestselling A320-series jets to 65 units a month in 2023 and 2024, it said. At the same time, the company maintained its goal of lifting production of the family of single-aisle jets to 75 a month in the “middle of the decade.”

Missing this year’s delivery target won’t have any impact on profitability and the free cash flow guidance for 2022, Airbus said. Airbus rose as much as 1.3% in Paris trading, closing before the company made the delivery announcement. The stock is little changed this year, while rival Boeing Co. has lost 11% in value.

The guidance revision wasn’t entirely surprising after Faury acknowledged in an interview last month that reaching the goal was a stretch, giving himself some extra wiggle room by saying the plan for deliveries was “around 700.”

Still, the Toulouse, France-based company is no stranger to a year-end rush, having shipped 138 planes in December 2019, before the coronavirus pandemic and its fallout disrupted production. That was up from 77 in November that year.

(Updates with details on production ramp up plan in fourth paragraph.)