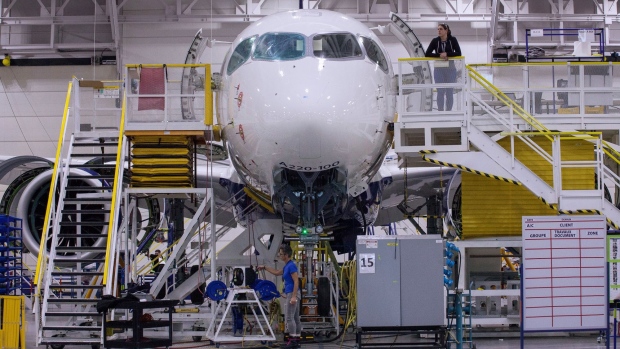 Workers inspect an Airbus SE A220 plane at the end of the assembly line at the Airbus Canada LP assembly and finishing site in Mirabel, Quebec, Canada, on Thursday, Feb. 20, 2020. Airbus CEO Guillaume Faury said that the company plans to invest up to 1 billion euros on the A220 this year. Photographer: Valerian Mazataud/Bloomberg , Bloomberg

Airbus SE delivered the most aircraft since December last month, a victory in the battle to keep its factories running and revenue flowing amid a prolonged downturn in air travel.

The September tally of 57 jets, mostly single-aisle with a handful of long-range aircraft, compared with 39 handovers recorded in August, according to a statement Friday. Still, Airbus saw no new orders -- a reminder of the downturn caused by the COVID-19 pandemic that’s shown little sign of letting up.

The month’s figures marked progress on a number of fronts for the planemaker, which has struggled to maintain jetliner deliveries as its airline customers seek to defer orders to protect their own cash reserves. September saw the Toulouse, France-based company make headway on tackling the backlog of finished aircraft, including nine of the larger, wide-body planes for which demand has cratered.

In normal times, Airbus and U.S. rival Boeing Co. would have racked up dozens of orders for hundreds of planes over the summer.

Airbus slashed its production-rate targets in April and Chief Executive Officer Guillaume Faury said this week they would stay 40 per cent lower through 2020 and 2021. The company still has a significant backlog of undelivered jets, raising questions over whether it may need to cut production further.

The company, which is due to release its third-quarter earnings on Oct. 29, has also been stepping up warnings about jobs. Chief Operating Officer Michael Schoellhorn said last week that plans to slash 15,000 staff would be the minimum requirement.