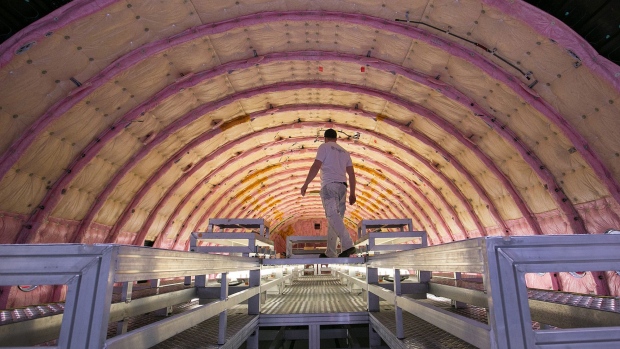 An employee stands inside the passenger cabin of an Airbus A350 twin-engine wide-body jet airliner on the Airbus SE aircraft fuselage assembly line in Hamburg, Germany, on Tuesday, Feb. 27, 2018. Airbus is considering increasing production rates for its best-selling single-aisle A320 jetliners, as airlines around the world place orders for hundreds of planes to meet surging demand for air travel. Photographer: Krisztian Bocsi/Bloomberg , Bloomberg

(Bloomberg) -- Airbus SE is closing in on a deal to supply Dutch airline KLM with single-aisle jets, unseating incumbent Boeing Co., according to people familiar with the matter.

The planemakers are competing on an order for as many as 160 aircraft for KLM and low-cost carrier Transavia, as parent Air France-KLM refreshes the brands’ medium-haul fleets.

The contest remains in flux, with Boeing’s 737 Max still in contention for the KLM part and Transavia up for grabs, said the people, who asked not to be named with talks still under way. A decision could be reached as soon as this week, the people said. Reuters reported earlier that KLM was leaning toward the Airbus A321.

No decision has been made, an Air France-KLM representative said. Airbus and Boeing declined to comment.

Wrestling away KLM would be a coup for Airbus. The European planemaker has had only limited success snatching customers from Boeing despite two Max crashes that triggered a two-year grounding and design revisions. A large order from Air France-KLM would also help Airbus build the case for a planned acceleration of narrow-body production that’s been met with resistance from suppliers who question whether there’s enough demand.

While both KLM and Transavia currently fly 737s, Air France-KLM said in September that the purchase, covering 80 firm orders and another 60-80 options, could be split.

One selling point for the A321, the largest jet in the A320neo family, is its capacity to seat upwards of 230 passengers with better range than Boeing can match. The extra seats would allow KLM to bring more people in and out of Amsterdam while accommodating tight limitations at Schiphol airport.

The A321 helped Airbus nab U.K. leisure carrier Jet2 Plc, formerly a Boeing customer, earlier in the year, and secure a bumper 255-jet deal with a group of four discount airlines backed by Bill Franke’s Indigo Partners last month at the Dubai Airshow.

Still, Boeing has used the Max’s comeback to build a lead in the order race between the two planemakers this year.

French Finance Minister Bruno Le Maire last year called on Air France to be a good customer for Airbus after the state bailed out the carrier and is now its biggest shareholder with a 29% stake.