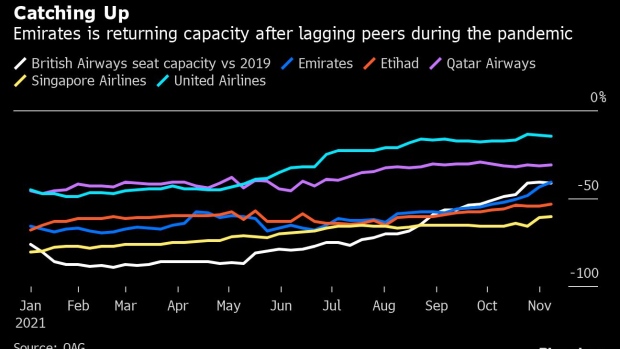 (Bloomberg) -- Planemakers, airlines and aircraft financiers are gathered in Dubai for the first global air show since the pandemic began. The mood is surprisingly optimistic, after Covid plunged the industry into its worst-ever crisis.

Airbus SE Chief Executive Guillaume Faury told Bloomberg TV on Monday he’s starting to see signs of a recovery in aircraft demand. The planemaker notched its second big order of the expo, a 111-jet mix of narrow- and wide-bodies that includes its first deal for the coming A350Fs, with leasing giant Air Lease Corp.

Cargo was a major theme on Monday as Emirates reached a deal with Israel Aerospace Industries to convert Boeing Co. 777-300ERs. Shares of the U.S. planemaker rose premarket after it expressed optimism over 737 Max sales and deliveries in China.

Meanwhile, Emirates may go public, along with some of its units, according to its chairman. President Tim Clark said on Sunday he’s conducting a fleet “reset,” which might amount to a shift away from Boeing, and that demand for international travel is returning.

Airbus notched its first freighter sale as it tries to chip into Boeing’s lead with a new cargo version of the A350 wide-body -- though the deal comes with an asterisk.

Leasing giant Air Lease Corp. signed a letter of intent to buy seven A350Fs, along with 100 narrow-body jets and four A330neo twin-aisles, in the second major order win for Airbus at the Dubai Airshow.

Because it’s not a firm deal, Air Lease could ultimately back out, or another customer could potentially swoop in with a commitment before an Air Lease order is finalized.

Airbus shares were up 2.4% in the wake of the Air Lease agreement and a massive 255-plane narrow-body deal on Sunday with a group of discount airlines led by Wizz Air Holdings Plc.

Boeing is also up in premarket trading in New York, on optimism for a resumption of deliveries in China.

The world’s largest long-haul airline and its units may take part in plans to list 10 state companies on Dubai’s bourse, Emirates’ chairman, Sheikh Ahmed Bin Saeed Al Maktoum, told  Asharq TV. The hub airline has turned Dubai into a global crossroads over past decades, but it’s been hard-hit by the pandemic. The government to invest some $3.7 billion in equity to keep it going. Its units include aircraft services firm Dnata. Sheikh Ahmed also heads leasing company Dubai Aerospace and regional carrier FlyDubai.

Israel Aerospace Industries reached a $1 billion agreement with Emirates to convert four Boeing 777-300ER passenger jets into freighters, starting in 2023. The work will be carried out at a site operated by Etihad in Abu Dhabi, IAI said. The agreement has potential to provide passenger-to-freighter conversion services to more aircraft, as airlines and manufacturers seek to exploit growing demand for air cargo.

The deal also marks one of the first dividends for aviation companies from a normalization of relations between the UAE and Israel last year. The UAE is seeking to grow trade with Israel to more than $1 trillion over the next decade

Boeing Seeks Partners to Convert Passenger Jets for Cargo Use

A contentious issue related to paint on A350s has put Airbus at odds with one of its biggest customers, Qatar Airways, for months. The dispute has led to the grounding of more than a dozen jets and clouded the outlook for a sale to the Gulf carrier of an A350 freighter version. Airbus chief Faury said in an interview that he’s proposed remediations which haven’t yet been implemented by the airline. Airbus is continuing to have constructive discussions with Qatar to manage situation, he said. He doesn’t see any airworthiness issues with the planes, a stance backed by the European Aviation Safety Agency.

Qatar Air Ups Ante in A350 Paint-Job Dispute With Airbus

Airbus’s 255-plane deal with Wizz Air and three Indigo Partners stablemates justifies the case for ramping up production to as many as 75 A320-series jets per month, Chief Executive Officer Guillaume Faury said in an interview. He said most of the deliveries will come in the second half of this decade, adding to long-term visibility on demand. As for further orders at the show: “Always expect more but will see what the timing looks like.”

The global carbon market agreement at COP26 in Glasgow was a “key milestone” for the industry, Airbus’s Faury said. He said the planemaker, which plans to launch a hydrogen-powered jet by 2035, wants to be a leader within the industry on decarbonization.

“We’re fully convinced we need to decarbonize the industry, there’s no other way and the sooner we do it the better because each and every ton of carbon that goes into the air contributes to global warming,” he said. What has happened in Glasgow with COP really goes in the same direction.”

COP26 Finally Set Rules on Carbon Markets. What Does It Mean?

In a 20-year market forecast issued on Saturday, the company indicated that the replacement of older, dirtier aircraft will accelerate, aiding sales of new freighters in particular. Newer aircraft are more efficient, emitting fewer greenhouse gases, and can use alternative jet fuels that policymakers and aviation officials touted in Glasgow.

The United Arab Emirates appears to have followed governments including Turkey in using flight bans to stop migrant flows that are feeding diplomatic tensions in eastern Europe. Belarusian airlines won’t accept citizens of Afghanistan, Iraq, Yemen and Syria for boarding on flights from Dubai to Minsk, according to state-owned airline Belavia.

The measure was taken after a decision of the “competent authorities of UAE,” it said on its website. The migrant issue has fed tensions with Poland, which introduced the state of emergency in early September and extended it through November to stem an inflow of mostly Middle Eastern migrants through Belarus.

“We see traffic rates going up,” Airbus’s Faury told Bloomberg TV. “This is still a Covid-19 situation, we’re not at the end but we’re starting to see the light at the end of the tunnel.” Faury expects a full recovery by 2023-25, with Asia trailing. Airbus shares rose as much as 3.1% on Monday, after the planemaker secured a new order.

Faury’s comments echo Dubai Airports Chief Paul Griffiths, who said on Sunday he is optimistic the airline industry will recover by the start of 2025. “I’m hoping that might be a fairly conservative estimate,” he said.

Head of UAM Balkiz Sarihan said Airbus hopes to certify its electric vertical takeoff and landing aircraft with European regulators EASA by 2024. While Airbus welcomes competition, it says it’s more focused on getting the technology right than being first. The company unveiled a change to its concept which it called City Airbus Next Gen at a sustainability summit in September, to move to a fixed-wing design.

Emirates President Tim Clark has perfected the act of playing arch-rivals Airbus and Boeing off one another. Speaking in an interview, Clark said he’s conducting a fleet “reset.” That, in turn, might amount to a shift away from Boeing, which the executive singled out as still having issues to resolve around the 777X wide-body, for which Emirates is the biggest buyer.

“You can never say never,” he told Bloomberg Television. “There are issues still out there which Boeing has got to resolve. We also have aircraft from Airbus coming in. So we’ll have a look at all that and see how it best fits the network. In terms of mix and the absolute number that could all change.”

Day 1: Demand Is Back

Airbus made a strong case for its plan to accelerate production again after the Covid-19 crisis tipped aviation into the industry’s worst crisis ever. The European planemaker notched a 255-jet order on Sunday with a group of four discount airlines backed by Bill Franke’s Indigo Partners, and it’s discussing a large deal with Air Lease Corp. that would include a mix of planes including its coming A350 freighter, according to people familiar with the matter.

Rival Boeing Co. is closing in on orders for its planned 777X freighter and is nearing a narrow-body deal with Indian startup airline Akasa, Bloomberg reported last week. That deal would mark a critical breakthrough in the southeast Asian country, where Airbus is the leader. In China, Commercial Chief Stan Deal is confident Boeing will soon be logging 737 Max orders again, as evidence mounts that an almost-two-year grounding in its most important market after the U.S. is about to end.