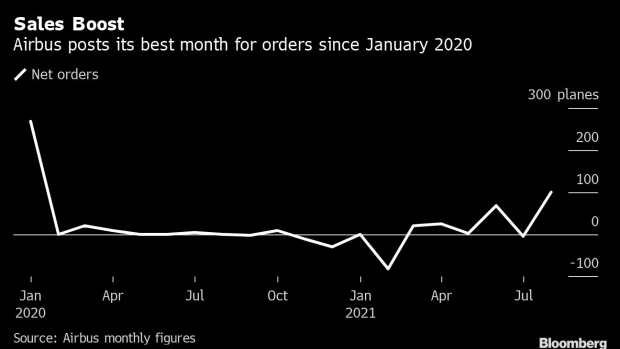 (Bloomberg) -- Airbus SE is getting a potential boost from Hungarian discount carrier Wizz Air Holdings Plc’s ambitious plan to catapult itself out of the pandemic ahead of rivals.

The Budapest-based airline is weighing a purchase of at least 100 Airbus narrow-body jets, according to people familiar with the discussions. Such a deal would top up one of the largest-ever aircraft orders, and help the European planemaker narrow a sales gap with with U.S. rival Boeing Co.

The talks come as Wizz expands beyond its Eastern European heartland, while Airbus tries to convince suppliers that there is sufficient demand to support rapidly hiking output of its A320neo family of jets beyond 2019 levels.

The discussions with Wizz, part of a constellation of budget carriers that count Bill Franke’s Indigo Partners as their biggest shareholder, offer further evidence that Airbus is evolving from its strategy of maintaining deliveries throughout the Covid-19 pandemic. The focus has now turned to sales, with Airbus nabbing an order from Boeing customer Jet2 Plc last month as it posted its strongest order performance since the start of the crisis.

Wizz is in expansion mode, with Bloomberg reporting Thursday that the airline was the mystery bidder for U.K.-based EasyJet Plc. Wizz has focused its operations around Airbus’ larger narrowbodies, with 34 A320neos and 202 A321neos already on order.

Representatives of Airbus, Wizz and Indigo Partners declined to comment.

After a slow start to the year, Airbus also sealed recent deal with Delta Air Lines Inc. It’s competing with Boeing for a big order for 160 narrow-body planes from Air France-KLM, as well as one for Italia Trasporto Aereo SpA, the successor to bankrupt Alitalia.

The ITA order is being finalized with Airbus, Jefferies analyst Sheila Kahyaoglu wrote in a note this week, while the Air France-KLM deal could also favor the Toulouse, France-based planemaker given recent French aid for the airline, she said. Paris is the biggest shareholder in both Airbus and Air France-KLM.

Franke’s Indigo Partners, also the largest investor in Denver-based Frontier Group Holdings, Mexico’s Volaris and owner of JetSmart Airlines SpA of Chile, placed an order for 430 A320-family aircraft in 2017, parceling out the aircraft to all four carriers.

Wizz Air got 146 planes from the bumper order and thanks to follow-on deals, now has 236 jets on order from Airbus.

While that would seem to remove the need to do an immediate deal, Wizz Air has sought to grow during the pandemic at the cost of weaker players, securing earlier slots for Airbus deliveries and gearing up its schedule sooner than competitors. It’s also stretched eastward, starting up a joint venture in Abu Dhabi earlier this year.

While Airbus has maintained a lead over Boeing in deliveries this year, it still trails in orders as the U.S. planemaker replenishes the backlog of its 737 Max model after an extended grounding.

Boeing had accrued 257 orders net of cancellations and conversions through July, while Airbus was sitting on 33. The European company added 99 net orders in August, while Boeing’s latest monthly figures are set to be released on Tuesday.