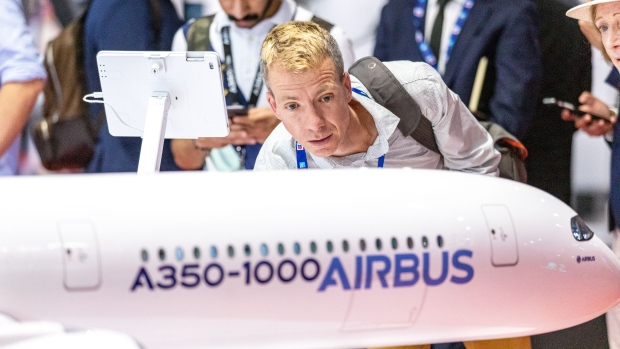 Airbus SE secured deals valued at US$30 billion from two Middle Eastern carriers on the second day of the Dubai Air Show, pulling ahead of Boeing Co., whose grounded 737 Max has stymied the U.S. company’s sales campaigns at the biennial event.

Emirates finalized the purchase of 50 A350 wide-bodies valued at US$16 billion, changing a previous tentative commitment that had also included 40 A330neo long-range jets. Two hours later, Air Arabia PJSC followed up with a deal for 120 A320neo-family models worth US$14 billion at list price. The carrier already operates about 50 A320 aircraft together with a handful of leased A321neos.

The two announcements gave Airbus a commanding lead over Boeing, whose biggest deal was a top-up purchase by Turkish holiday specialist SunExpress for 10 additional 737 Max models. The U.S. manufacturer can still hope for a commitment from Emirates, whose chairman said in Dubai that the Boeing 787 Dreamliner remains in the mix. Talks are also still ongoing for the 737 Max, which remains grounded after two deadly accidents.

"It’s a strong endorsement of the 350, the order by Emirates,” said Guillaume Faury, appearing in Dubai in his capacity as Airbus chief executive officer for the first time. “The 350 fits very well with the Emirates brand, and it is very complementary to the A380" super-jumbo.

Boeing still has an opportunity to make a splash, as it did when British Airways-parent IAG SA committed to a massive 737 Max order at the Paris show a few months ago. Indian low-cost carrier SpiceJet Ltd. said in Dubai that it’s in talks to buy more 737 Max aircraft to feed its expansion plans. Discussions are taking place and the size of the order hasn’t been determined, Chairman Ajay Singh said in Dubai.

The Dubai event has lost some of its rapid-fire order flair that dominated shows of years past, when the big three Middle East carriers — Emirates, Etihad Airways and Qatar Airways QCSC — gorged on record purchases. Etihad has since aggressively pared back its growth ambitions after accumulating billions in losses in a failed expansion strategy, while Qatar isn’t at the show because of political tensions in the region.

The Airbus A380 has also evaporated as a big draw in Dubai after Airbus decided earlier this year to run down production of the world’s largest passenger airliner by 2021. Emirates is by far the biggest operator of the twin-deck model, while Etihad and Qatar have also bought the model, albeit in much smaller doses. Airbus still has 10 A380s to make, a single one for All Nippon Airways of Japan and 9 for Emirates, which currently has 114 in its fleet.

Etihad said it will take 20 fewer 787 Dreamliners than previously planned, after already paring back an order for the Boeing 777-9 to just six jets from 25 and outright canceling a planned purchase of 42 A350s.

The grounding of the 737 Max has been felt acutely by Emirates sister carrier FlyDubai, which has ordered 251 of the jets and has been forced to pull some out of service because of the suspension.

As Emirates has put its focus on the regional and short-haul market, it’s aligned more closely with FlyDubai, increasingly synchronizing the two carriers’ strategies. As a result, any deal for the 787 Dreamliner may be affected by how soon Boeing can get the 737 back into service. Emirates has said it wants to buy 40 Dreamliners, a holdover from the 2017 show.

Both Gulf carriers are chaired by Sheikh Ahmed Bin Saeed Al Maktoum, who is also Dubai’s top aviation regulator. Asked at the show if the Boeing 787 order hinged on the 737 Max, Sheikh Ahmed said that they will always look at the 787, and that discussions are ongoing.