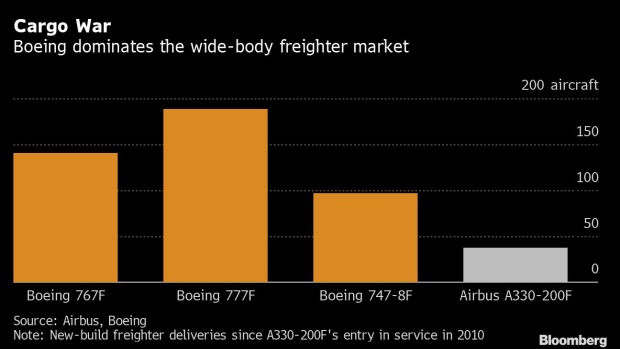 (Bloomberg) -- Airbus SE is poised to begin taking orders for a freighter version of its A350 twin-aisle as soon as next month, in a challenge to Boeing Co.’s dominance in the market for dedicated cargo aircraft.

The European planemaker has been speaking to more than a dozen potential customers and will seek board authorization to market the new plane in the coming weeks, provided it can line up enough firm commitments, according to people familiar with the matter, who sought anonymity discussing confidential matters. The program could officially launch by year-end, they said.

Going after Boeing in the freighter market would mark a major strategic push for Airbus, putting pressure on its rival in a segment where the U.S. planemaker has long held sway. Chief Executive Officer Guillaume Faury told Bloomberg News in April that he’s keen to challenge Boeing and that the A350, a modern, lightweight plane with carbon-fiber wings and hull, would be “a strong candidate” for a freighter.

The cargo version would be based on a modified A350-900 and may be slightly longer than the passenger version, according to the people. It would take several years to secure regulatory approvals and enter service.

An Airbus spokesman said that the company is always discussing new products with its customers and “not all studies see the light of day.”

Airbus, based in Toulouse, France, has established a lead over Boeing in the market for narrow-bodies, but has long lagged behind in bigger, more expensive twin-aisle aircraft. Boeing’s 777, 767 and 747 models lead the market for large dedicated freighters.

The A350, Airbus’s most advanced wide-body, has also been hurt by a collapse in demand for bigger planes caused by the coronavirus pandemic. While sales of cargo-only planes have been robust throughout the pandemic, long-distance travel is expected to take years to recover.

There’s some concern that the current level of demand for dedicated cargo jets will subside after air travel returns, because more capacity will be available for goods carried in the bellies of passenger jetliners.

There are also hundreds of planes that have been retired from passenger use during the pandemic that can be converted into freighters.

Airbus is banking that the A350’s fuel efficiency and cleaner emissions profile will make it an attractive choice for enough customers to make the program worthwhile.