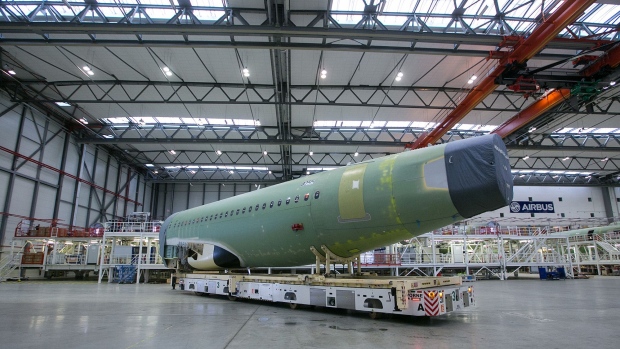 The assembled fuselage of an Airbus A320 narrow-body twin-engine passenger jet airliner is wheeled from the Airbus SE factory floor in Hamburg, Germany. , Bloomberg

(Bloomberg) -- Airbus SE maintained a brisk pace of jet deliveries in May, handing over more jets to customers than in the previous month, according to people familiar with the matter.

The European planemaker is likely to report about 50 handovers for the month, after making 45 deliveries in April, the people said, asking not to be identified before the figures are finalized. Airbus is due to publish monthly order-and-delivery statistics early next week.

At that level, May’s performance would take Airbus to roughly 220 deliveries so far in 2020, ahead of the 160 tallied at the same time last year -- an indication of why the Toulouse, France-based company is optimistic about an eventual recovery in demand. Airbus announced last week that it has told suppliers to prepare for a production ramp-for its best-selling A320-series jets to 64 per month by the second quarter of 2023.

An Airbus spokesman declined to comment ahead of publication of the official figures.

In the pandemic environment, handovers remain key both to getting cash in the door and to meeting the commitment to suppliers to ultimately ramp up production. Airbus’ focus on deliveries has paid off so far with first-quarter results at the end of April marking the third straight period of positive cash flow.

There are some signs of a cautious travel reopening, with vaccine campaigns in Europe and the U.S. beginning to bear fruit and Europe allowing quarantine-free travel within the bloc.

Airbus Chief Executive Officer Guillaume Faury has flagged the coronavirus surge in India as a headwind for the business, but April’s results showed lessors and Chinese airlines picking up the slack as deliveries to India fell.