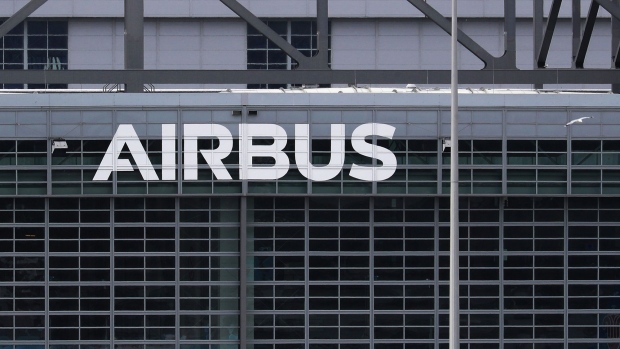 A China Southern Airlines Co. passenger aircraft takes off from the Airbus SE factory, in Hamburg, Germany, on Wednesday, May 13, 2020. Airbus secured just nine net orders in April and delivered 14 jetliners after airlines desperate for cash put off accepting new planes and clamped down on spending to deal with a crisis that could last several years. Photographer: Krisztian Bocsi/Bloomberg , Bloomberg

Airbus SE is preparing to ramp up output next year of its most important jet, the A320neo, in a sign of growing confidence on the part of the European planemaker that jetliner demand is poised to recover.

While no decision has been made, suppliers have been told to be ready to support a monthly rate of 47 A320neo-family planes per in the second half of 2021, Airbus said in an emailed statement Thursday. The company slashed the target rate of its popular single-aisle workhorse by a third in April, when demand evaporated as the coronavirus crisis gutted travel demand.

“We plan to maintain the rate 40 up till summer next year and we have asked the supply chain to protect up to rate 47 to be prepared for when the market recovers,” Airbus said.

The optimistic assessment suggests that Airbus is comfortable enough with demand to bet on an increase despite recent capacity cuts and order deferrals by major customers. Analysts have been warning that the production outlook for the European manufacturer and U.S. rival Boeing Co. may not be sustainable. Airbus didn’t say exactly when it expected to gear up, and said it may still make minor adjustments.

“We have done a re-evaluation of the situation after the summer period,” Airbus said. “We have refined the plan for the A320 family programs based on our current view of the market.”

Airbus, based in Toulouse, France, and Boeing have been negotiating intensely with lessors and with airlines, who found themselves in sudden distress this year when the coronavirus crisis flattened revenue. Last week Delta Air Lines Inc., a major customer, delayed US$5 billion of deliveries until after 2022. AirAsia X Bhd, the biggest customer for the A330neo wide-body, has asked to toss out its entire order book as it seeks to restructure its debts.

Boeing too is battling with customer setbacks as it prepares to return its grounded 737 Max, the main competitor to the A320neo, back into service after two crashes forced its grounding in March 2019. American Airlines Group Inc. said Thursday it had deferred delivery of 18 Max jets that were due in the next two years. Southwest Airlines Co., the biggest single customer for the Max, said it is looking to rework its deal starting with four dozen planes scheduled to arrive through 2021.

Airbus has largely managed to avoid order cancellations while Boeing has logged hundreds for the Max, as airlines leverage delays tied to the grounding to get out of contracts now that they don’t want the planes. Even so, Airbus’ optimism is surprising given airlines’ recent gloom over near-term prospects, said Bloomberg Intelligence analyst George Ferguson.

“One of the most successful airlines on the globe, Southwest, just told us they have 20 per cent too many employees and too many airplanes,” Ferguson said. Airbus could be attempting to time the market’s recovery while ensuring suppliers are prepared to ramp up, he added.

Setting production rates is a delicate balancing act for Airbus as it attempts to steady its struggling network of suppliers while protecting its own cash flow.

Like Boeing, it has shrunk its business in response to the unparalleled crisis, with a plan to trim 15,000 jobs. Airbus, which assembles the A320 in France, Germany, China and Mobile, Alabama, reached an agreement with French unions last week which will see it avoid compulsory redundancies until at least March 2021.

The company, which is poised to report results next week, has seen its shares sink 51 per cent this year. It stressed that no final decision had been taken on the A320.

For now, it will keep output rates of the A330 wide-body and its outgoing A380 super-jumbo steady. Airbus didn’t mention the A350, its most popular long-haul plane.