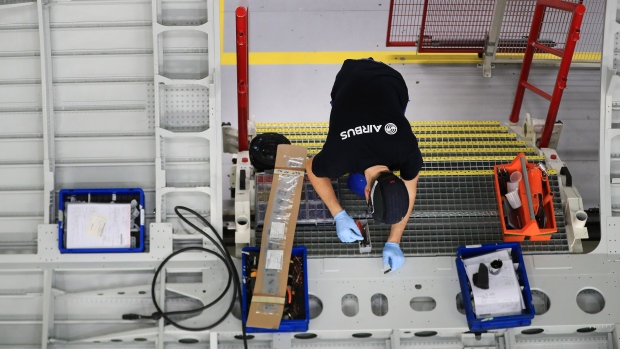 An employee works on a section of fuselage inside the new Airbus SE A320 passenger aircraft family assembly line hangar in Hamburg, Germany, on Tuesday, Oct. 1, 2019. An escalating battle over aircraft subsidies between the U.S. and the European Union threatens to damage both sides, said Airbus Chief Executive Officer Guillaume Faury. , Bloomberg

Airbus SE embarked on the most extensive restructuring in the planemaker’s history with plans to cut 15,000 jobs to steer it through an industry crisis brought on by the coronavirus pandemic.

The European manufacturer is scaling back to reflect a dramatic drop in demand for new aircraft as the impact of the outbreak leaves carriers low on cash and trying to postpone deliveries of existing orders.

Chief Executive Officer Guillaume Faury said earlier this week that the company’s output will be 40 per cent lower than expected for two years, and has previously warned it is bleeding cash.

The balance will come from other countries and the plans will be subject to agreement with the relevant unions.

Caught in an aircraft-market slump that could last as long as five years, Airbus is striving to bring down costs while avoiding political and labor tensions in its home nations. The company had initially sought to rely on voluntary-severance packages to generate the required savings but later came to the conclusion more drastic measures were needed.

Airbus has about 135,000 employees globally, with almost 81,000 of those in the hard-hit commercial-aviation division.

The move marks the latest step in adjusting a business that had been expanding for more than a decade before the rapid spread of COVID-19 ushered in widespread travel bans and the subsequent grounding of airline fleets.

While some countries are beginning to reopen borders, travel isn’t expected to return to pre-crisis levels before 2023 at the earliest, Airbus said.