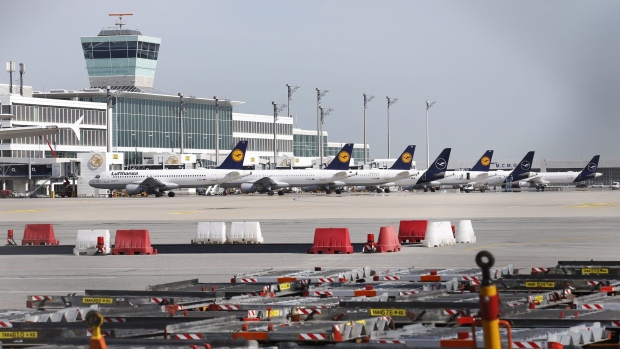 Europe’s US$36 billion of airline bailouts could herald a shift to lower-emission travel as countries impose environmental strings on aid. Those requirements may also mean customers have less choice and pay more.

Austria is taking the most radical steps in agreeing to fund the local arm of Deutsche Lufthansa AG.

The government will impose a minimum 40-euro (US$45) ticket price to discourage non-vital journeys while hiking fees on flights under 350 kilometers (217 miles) to 30 euros. And Austria Airlines services to locations less than three hours from Vienna will be replaced by train journeys.

“It’s good to end things that just don’t make sense, such as tickets that are too cheap,” Lufthansa Chief Executive Officer Carsten Spohr said Monday after the German group’s Austrian Airlines unit sealed 450 million euros in state support. “It doesn’t make sense ecologically or economically. In that respect I can imagine implementing these measures in other European locations.”

France is also taking steps to reduce short-haul flights, requiring Air France to cut domestic services by 40 per cent as part of a 7 billion-euro package, and the Netherlands is expected to impose environmental conditions on funding for sister company KLM. Lufthansa itself avoided such strings in its rescue.

French Finance Minister Bruno Le Maire has said the government wants to remake Air France into the greenest carrier in the world partly by curbing domestic flights by 40 per cent and pulling service between cities that are less than 2 1/2 hours away from each other by rail.

“The measures are vague, lack ambition and some are problematic,” Greenpeace France said in a statement Tuesday, calling for a greater reduction in flights.

What the government is proposing, which would keeping the shortest connecting flights to Paris-Charles de Gaulle airport, would lower air travel carbon emissions in France by just 6.6 per cent, it said, citing figures from the Climate Action Network.

For low-cost airlines, which are more profitable than network airlines and have received far less state support, elements of the new green agenda threaten to add insult to injury. Ryanair Holdings Plc, Europe’s biggest discounter, and Wizz Air Holdings Plc, the No. 1 in Eastern Europe, have already hit out at the bailouts for their potential to distort competition for years to come.

Tamara Vallois, spokeswoman for Wizz, said Tuesday in an email that Austria hasn’t yet made it aware of any stipulation on minimum fares but it “rejects any decision” that undermines the freedom of pricing and the European Union’s principles regarding the free movement of services, people, goods and capital.

Ryanair’s Lauda arm, a low-cost service operating in Austria, raised the same concerns about the EU’s founding principles in an e-mailed statement and said it opposes any restrictions on fares.

Ryanair CEO Michael O’Leary was involved in a spat with Spohr last year as airlines came under increased pressure to cut carbon emissions.

Lufthansa argued that discount carriers were to blame for encouraging people to take unnecessary trips, while O’Leary blamed the German company for operating older, thirstier planes and said Spohr wanted to stop poorer people from flying.

Train versus Plane
Austria’s phasing out of short-hop routes will focus on those where the train can make the trip in three hours. That could end Vienna-Salzburg flights, and also services from the capital to Graz and Klagenfurt once new rail tunnels are completed later this decade.

Even then, Austrian Airlines has insisted regional airports retain air links to one of Lufthansa’s other hubs in Munich, Frankfurt and Zurich.

Austria, where the Green Party is a junior partner in a coalition government, also plans to negotiate a climate agreement with Lufthansa to achieve further carbon and noise reductions, though Spohr has said the replacement of older aircraft will only be possible when Austrian Airlines can afford it.

--With assistance from Siddharth Philip and Tara Patel.