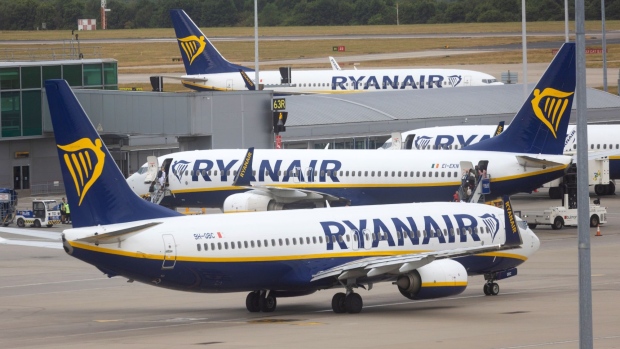 Passenger aircraft, operated by Ryanair Holdings Plc, on the tarmac at London Stansted Airport, operated by Manchester Airport Plc, in Stansted, U.K., on Monday, July 25, 2022. Ryanair said passengers remain cautious about booking, clouding its prospects beyond a summer travel boom in which it’s suffering less disruption than many of its rivals. Photographer: Chris Ratcliffe/Bloomberg , Bloomberg

Weiss said in a briefing in London that if Truss were a company executive the natural reaction to a strategy being so badly received would be to reverse it, and that Britain should not be “bottom of the pile” in terms of the performance of its currency.

“Liz Truss said she would make the difficult decisions on entering into the role,” Weiss said Tuesday. “Maybe we need to make more difficult decisions to reverse the decline in the pound and ensure the country is not left with unsustainable perceived weakness in international eyes, which of course then impacts interest rates, consumers, mortgage rates and the entire economy.”

Reversing course “is not a bad thing to do,” and should be seriously considered by the government, the CEO said, adding: “They need to stabilize the fiscal affairs of this country.”

Weiss said that while airlines are concerned at the slump in sterling versus the dollar, Virgin Atlantic is partially cushioned since almost 35% of its sales originate in the US. The carrier also took out financial instruments some months ago, essentially shorting the pound, and those are generating substantial returns as it approaches parity with the greenback.

Virgin Atlantic remains on “a sound footing,” Weiss said, with no immediate indication of a decline in UK bookings tied to the events of the past week. Load factors for the fourth quarter should be around 85%, he said. There’s also a prospect of the currency trend stoking demand for US trips to the UK over coming months.

He spoke after the airline, controlled by billionaire Richard Branson, said that it was joining the SkyTeam global alliance that includes Air France-KLM and minority owner Delta Air Lines Inc.

O’Leary, speaking on Bloomberg Television, said the Irish firm is “reasonably insulated” against the weakness of the pound, with sterling revenues balanced out by sterling costs from its 8,000 UK staff. The discount carrier is hedged on the dollar-euro rate at 1.24, covering its dollar-denominated aircraft purchases, and on oil at about $64 a barrel through next April, he said.

Walsh, who formerly ran British Airways parent IAG SA, condemned what he called “knee-jerk government responses” aimed at courting the electorate while having a “massive economic impact” on companies. “I’m not sure that all of these policies were thought through.”

The Virgin, Ryanair and IATA chiefs spoke out on sterling’s slide after EasyJet Plc CEO Johan Lundgren said Monday that the decline was set to inflate costs, while stressing that it is is comprehensively hedged on jet fuel and currency fluctuations.