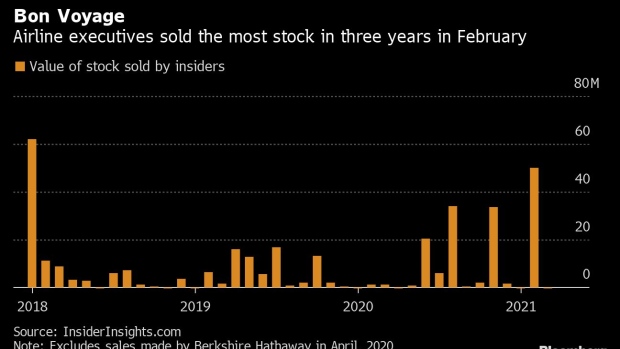 (Bloomberg) -- Airline executives and directors sold $49.9 million of stock in February, the most in three years, as industry shares posted a record rally fueled by a widening vaccination effort.

The top individual sellers were at Allegiant Travel Co. and Southwest Airlines Co., two leisure-focused carriers that are among analyst picks to benefit from a rebound in vacation travel as the coronavirus pandemic eases. Executives from Delta Air Lines Inc. and Mesa Air Group Inc. also sold significant holdings, according to data from InsiderInsights.com, which analyzes such transactions.

The insider sales increased as investors bet that vaccine campaigns would gain steam and improve the prospects for a travel rebound. Airlines got hammered last year by an unprecedented drop in demand for flights. Continued stock gains are far from guaranteed this year, as the industry’s recovery remains shrouded in uncertainty and the slump in lucrative corporate and international trips is expected to drag on.

The February surge in stock sales came after no airline insiders sold shares the previous month. An index of nine U.S. airlines jumped 30% in February, the most on record, led by a 45% advance for SkyWest Inc. Through Thursday, the stock gauge had rallied about 140% since hitting a seven-year low in May 2020.

As if to underscore the uncertainty, however, the index fell 3.3% at 1:14 p.m. in New York on Friday after sliding as much as 8.3% for the biggest intraday drop in almost six months.

Major carriers slashed jobs and cut executive pay because of the crisis, while Congress imposed compensation limits in exchange for tens of billions of dollars in aid.

Southwest’s insider sales made up 19% of the February total for airlines. President Tom Nealon collected at $2.98 million, while Chief Operating Officer Mike Van de Ven got $1.82 million and Chief Financial Officer Tammy Romo had $1.74 million. Restricted stock units paid to executives that vest in February carry “significant” taxes that aren’t fully covered by shares withheld for that purpose, Southwest said in regard to last month’s sales.

Executives and directors at American Airlines Group Inc. and United Airlines Holdings Inc. sold no shares, according to available data.