Boeing Is Bullish on Future of Airline Business

Airline losses from the coronavirus pandemic are set to surpass US$200 billion as travel curbs weigh on corporate and long-haul demand well into 2022, according to the industry’s main lobby.

Carriers are poised to post a collective deficit of US$11.6 billion next year, the International Air Transport Association said Monday in Boston at its annual meeting. The trade body also increased its loss estimate for this year, and revised upward the shortfall for 2020.

The combined US$201 billion in net losses over the pandemic-blighted period eclipses close to nine years of industry earnings, based on IATA figures. While domestic and regional travel have begun to rebound, there’s been little recovery in the globe-spanning business routes so crucial to many carriers. 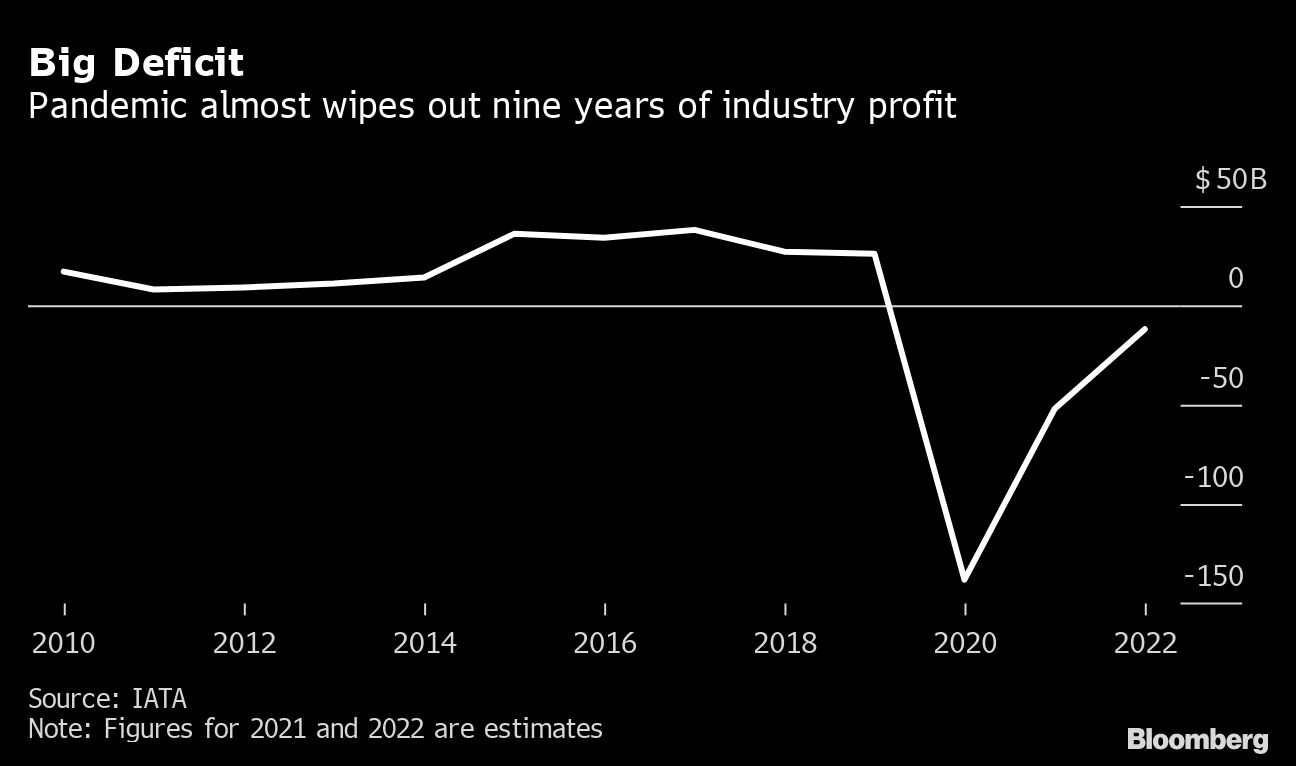 The U.S. is poised to open its borders to trans-Atlantic visitors next month, but other long-haul markets remain in the doldrums, especially those connecting Asia with Europe and North America.

“The magnitude of the COVID-19 crisis for airlines is enormous,” IATA Director General Willie Walsh told the largest gathering of chief executives officers from the industry in more than two years. “People have not lost their desire to travel as we see in solid domestic market resilience. But they are being held back from international travel by restrictions, uncertainty and complexity.”

Carriers face an added challenge in responding to demands that the industry move faster to lower its carbon footprint. The pressure, which started before the pandemic, has only increased in recent months. IATA on Monday accelerated its goals, setting a target to reach net zero emissions by 2050.

Passenger traffic -- the number of people flying times the distance covered -- is expected to reach 40 per cent of pre-pandemic levels this year, rising to 61 per cent in 2022, when the traveler tally should be 3.4 billion. That’s similar to the customer figure for 2014, but about one-quarter down on the 2019 number.

To aid the recovery, Walsh called on governments to simplify complex travel restrictions and allow vaccinated travelers to move freely between countries.

“Travel restrictions bought governments time to respond in the early days of the pandemic,” he said. “Nearly two years later, that rationale no longer exists.”

Losses this year will total almost US$52 billion, IATA predicts, worse than the US$48 billion estimated in April, after flights remained limited through the normally lucrative northern summer.

Last year’s loss was revised to about US$138 billion from US$126 billion.

Among global regions, only carriers in North America are forecast to return to profit next year, with almost US$10 billion in net income. European airlines will register about US$9.2 billion in losses, according to IATA, while Mideast operators, highly dependent on intercontinental routes, will rack up a US$4.6 billion deficit.

Walsh, previously CEO of British Airways owner IAG SA, offered some optimism to the gathering airline leaders, saying the sector is “well past the deepest point of the crisis,” and that “the path to recovery is coming into view.”

Domestic flights, benefiting from the removal of curbs, will be almost back to pre-pandemic passenger levels next year, IATA said.

Air cargo is another bright spot, with demand this year expected to be 8 per cent above 2019 levels, increasing to more than 13 per cent higher in 2022 amid a surge in shipments from a global restocking and the shift to online purchasing.

Walsh said carriers will continue to need wage-support measures from governments until international travel recovers at scale, as well as regulatory steps such as the suspension of use-them or lose-them rules for airport slots.

Airlines are forecast to rush back capacity faster than traffic rebounds, hurting seat-occupancy levels. The average passenger load factor is expected to be about 67 per cent this year, rising to 75 per cent in 2022 -- still well short of the record 83 per cent figure set in 2019.

While IATA represents 290 airlines comprising 82 per cent of global air traffic, its membership excludes several low-cost carriers that are among those expected to rebound fastest from the crisis.