Air travel is becoming a test of physical endurance. Seats have shrunk, legroom has vanished -- and the airlines aren’t done with you yet.

Cebu Air Inc., the Philippines’ biggest budget carrier, last month said it was moving kitchens and bathrooms on some of its new A330neos to cram in a record 460 seats, 20 more than the plane’s current maximum. It’s part of a broader push, particularly in Asia, to stuff more people into jets flying the most popular routes, according to aviation researcher Landrum & Brown. 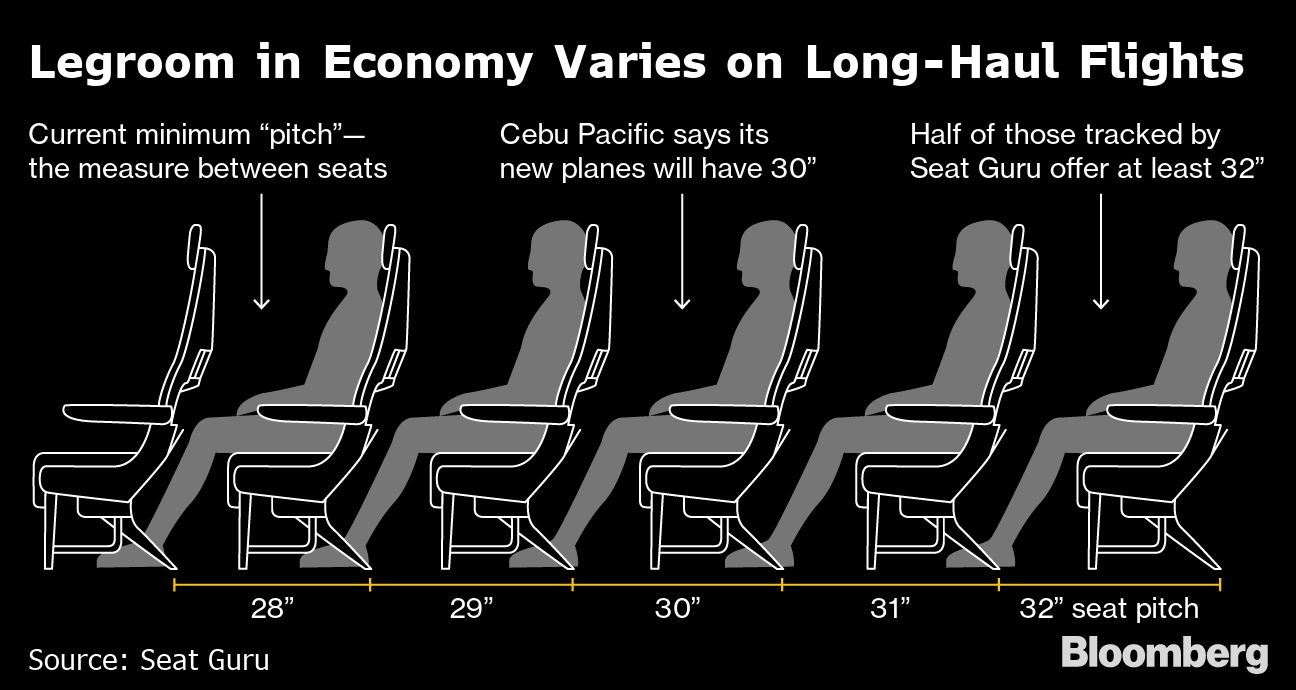 “It’s all a matter of squeezing as many passengers as they can,” said Mathieu De Marchi, a Bangkok-based consultant at the firm. “It’s only going to get worse over the next decade.”

Even if paying customers are less happy, packing more of them into cabins has helped turn around the U.S. aviation industry in recent years. In Asia, where 100 million people fly for the first time every year, the strategy is now the bread and butter for low-cost carriers serving an exploding middle class that cares more about price than comfort.

Asia’s demand has led to industry shortages of almost everything, from pilots and mechanics to airports and runways (to say nothing of leg room). Carriers go to great lengths to avoid buying more aircraft and having to pay for extra landing rights at airports that are close to bursting.

Buying bigger planes is one way to deal with the problem, as AirAsia Group Bhd. is doing. The Malaysian budget carrier in June said it was changing an order for hundreds of aircraft to a larger model that carries 50 more passengers and flies about 600 miles (1,000 kilometers) further.

Another tactic is simply bolting in more chairs. European low-cost carrier Ryanair Holdings Plc led the charge in 2014 when it ordered high-density jets from Boeing Co. with eight more seats than normal. Cathay Pacific Airways Ltd., once a hallmark of comfort, in 2017 started cramming an extra seat into each economy row on its Boeing 777-300s, at the cost of about an inch of personal space for each passenger.

Less legroom is now the industry norm. In the early-2000s, rows in economy used to be 34 inches (86 centimeters) to 35 inches apart; now 30 to 31 inches is typical, though 28 inches can be found on short flights, according to Washington D.C.-based advocacy group Flyers Rights. Seats have narrowed, too, from about 18.5 inches to 17 inches on average. 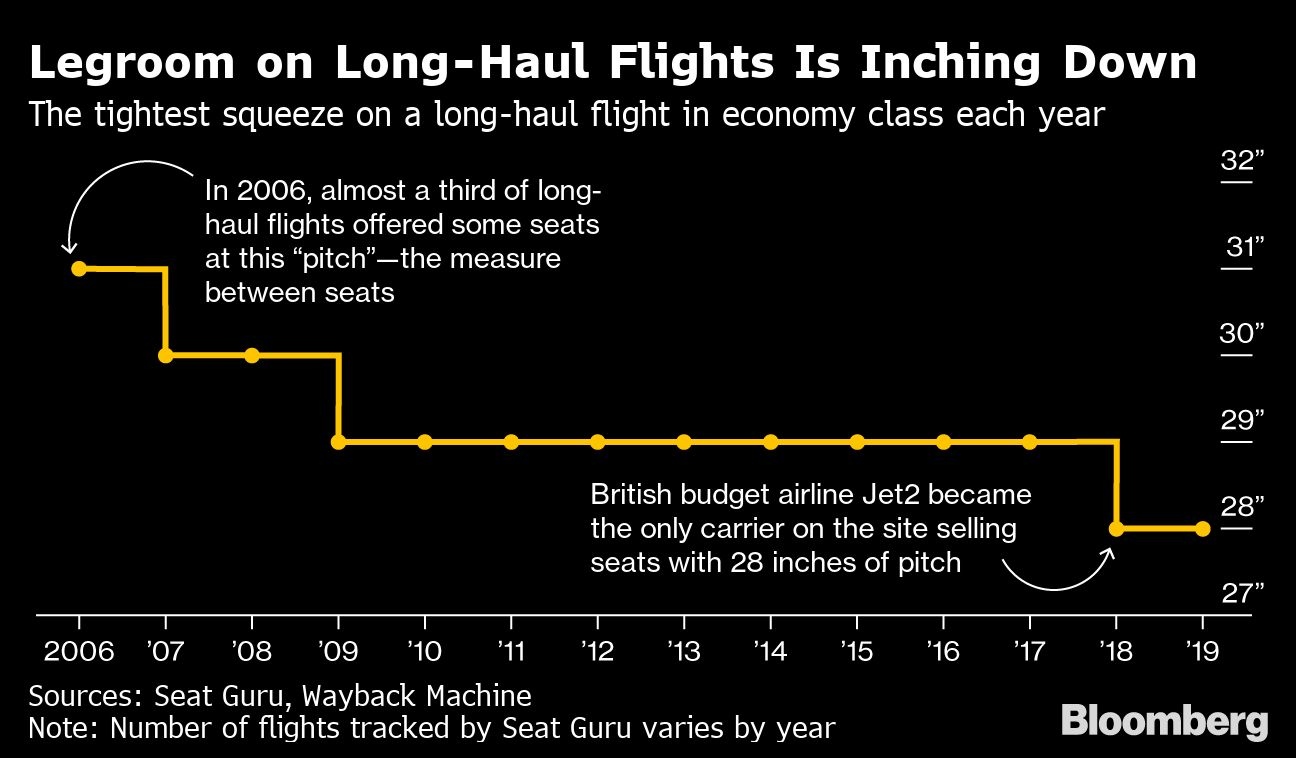 Where someone’s personal space starts and ends can be contentious, especially when there’s not much space to begin with. It’s no surprise that air rage most commonly occurs in economy class. Flights have been forced to make unscheduled landings because passengers were bickering over reclining seats.

Janet Bednarek, an aviation historian at the University of Dayton, Ohio, says smaller seats are less controversial in Asia, partly because Asians tend to have slighter builds than Americans or Europeans.

“Where people are smaller on average it is not as big an issue,” she said. “Many people are willing to put up with discomfort in exchange for low-price tickets.”

And prices have come down. Some international flights cost less than half of what they did a decade ago, according to Australia’s Qantas Airways Ltd. Competition from low-cost carriers has forced airlines everywhere to lower fares and charge for things that were once free. Among the new extras one can buy: space.

A one-way ticket to Shanghai from Manila, a four-hour flight, can cost less than US$100 on Cebu Air. But there’s another price to pay: Seats on the planes are just 16.5 inches wide, less than the width of two hand spans and short of the 18-inch minimum that the manufacturer, Airbus SE, says is comfortable.

Cebu doubled down in June with a US$6.8 billion order for Airbus jets that includes 16 higher-capacity A330neos. Airbus says the plane is designed to fit 260 to 300 passengers in a typical layout that has first-class, business and economy cabins. For “higher-density configurations” -- code for bare-bones economy -- the planes fit as many as 440, the manufacturer says.

Cebu is planning for 460, once the layout is certified.

In an email, Cebu Chief Executive Adviser Mike Szucs said “customer comfort and experience will be a primary consideration” but airfares are “always an aspect consumers are conscious about.”

Aviation website Simple Flying sums up the situation: “This will make for one interesting long-haul.”

--With assistance from Chloe Whiteaker