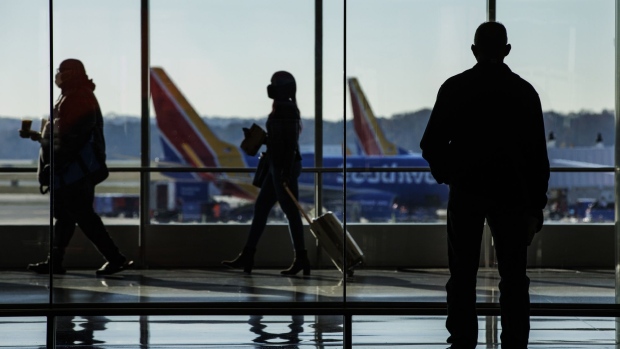 Travelers walk through the concourse at Baltimore–Washington Airport (BWI) in Baltimore, Maryland, U.S., on Wednesday, Nov. 24, 2021. Air traffic for the Thanksgiving holiday is expected to approach pre-pandemic levels and travelers are likely considering their plans with some dread, given fresh memories about thousands of canceled flights. Photographer: Samuel Corum/Bloomberg , Bloomberg

There has been no evidence that any of the federal Covid-19 relief package has been misused, and it ensured the industry remained intact after losing almost all its customers in early 2020, Nicholas Calio, president of the Airlines for America trade group, said in a letter to House lawmakers Tuesday.

“The Covid-19 crisis has been the most devastating challenge the U.S. airline industry has ever faced,” Calio said in the letter reviewed by Bloomberg News. “The recovery will be longer and more difficult than the industry’s recovery after the September 11th attacks.”

Widespread flight cancellations earlier this year at airlines including American Airlines Group Inc. and Southwest Airlines Co. have prompted questions about how how carriers spent the federal aid -- including $35.6 billion in grants for payrolls at the 11 largest passenger carriers.

Calio was responding to a Dec. 1 inquiry from House Transportation and Infrastructure Committee Chairman Peter DeFazio, an Oregon Democrat, and the committee’s top Republican, Sam Graves of Missouri.

The Senate Commerce, Science and Transportation Committee under Chairwoman Maria Cantwell, a Washington Democrat, plans to hold a hearing on the airline aid package on Dec. 15 at which several executives are expected to testify, committee spokeswoman Tricia Enright said.

The flight disruptions occurred due to a variety of reasons, such as a more rapid increase in passenger demand than expected, the reluctance of some furloughed employees to return to work and the time lag required to recertify safety-critical employees such as pilots, Calio said. Weather also played a role, he said.

“The entire nation and most businesses are dealing with a tight labor market, and airlines are no different,” Calio said.

The past two years have been one of the most tumultuous periods at U.S. airlines in history. After the coronavirus pandemic erupted, airlines lost more than 95% of passengers by April of 2020, prompting billions of dollars in losses.

In the past year, as passenger levels have rebounded partially, strict Covid-19 measures combined with tense politics have led to thousands of incidents involving unruly passengers as well as flight disruptions as carriers struggled to rebound.

Calio’s letter, one of the most forceful defenses of the industry to date, said the government aid -- which was split into payroll assistance and loan packages that must be repaid with interest -- had saved about 386,000 full-time jobs at carriers. That represents 85% of pre-pandemic workers.

Another 350,000 jobs in the airlines’ supply chain, the travel industry and the extra income that airline workers put into the economy were also spared, according to an analysis funded by the trade group.