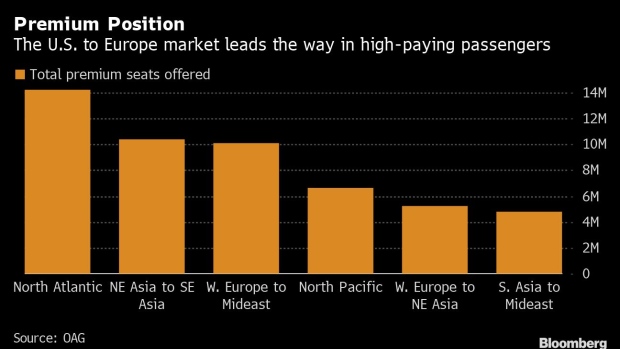 Carriers welcomed an agreement by President Joe Biden and Prime Minister Boris Johnson to create a joint task force to explore options for resuming travel, but are pushing for their administrations to go further than the tentative gesture.

Vaccinated people ought to be able to travel, Luis Gallego, chief executive officer of British Airways parent IAG SA, said in a Bloomberg TV interview. Given progress with rolling out inoculations in both countries, “we don’t see why they have to have restrictions between the U.S. and the U.K.”

The North Atlantic corridor joining the U.S. with Europe is the single most profitable corner of the global aviation market, filled with premium travelers paying extra for first-class and business-class seats. The business pumps billions of dollars into the British and American economies and supports hundreds of thousands of jobs, according to Drew Crawley, chief commercial officer of American Express Global Business Travel.

“The continued closure of these vital routes for more than 400 days has been detrimental to economic recovery in both countries, contributing to lost job hours and hindering innovation and solutions to our shared challenges,” Crawley said.

Throughout the pandemic, carriers on both sides of the Atlantic have lobbied forcefully for a relaxation of travel curbs, a call they renewed this week, just ahead of the G7 summit meeting in Cornwall. Along with their British counterparts, the participants included Delta Air Lines Inc., United Airlines Holdings Inc. and American Airlines Group Inc. and discounter JetBlue Airways Corp., which intends to start services to London later this year.

But setbacks with the virus have repeatedly frustrated those efforts. Most recently, the Delta variant first identified in India has quickly driven up infection rates in the U.K.

That’s forced U.K. officials into retreat on travel at the start of the usually busy summer season, when airlines were hoping for an acceleration.