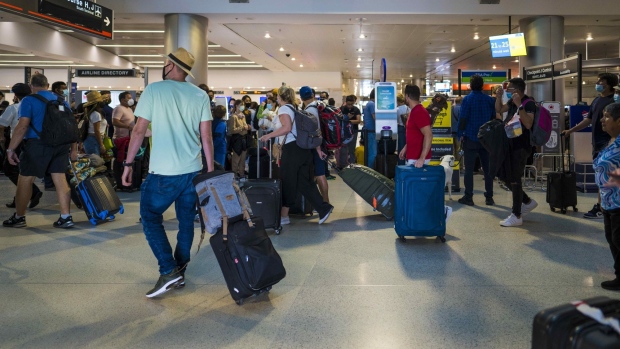 United Airlines airplanes on the tarmac at Newark Liberty International Airport (EWR) in Newark, New Jersey, U.S., on Monday, Jan. 3, 2022. Airlines greeted the New Year with more than 6,500 weekend cancellations in the U.S., closing out a bumpy holiday season as a winter storm swept eastward and carriers dealt with staff shortages caused by the rapid spread of the omicron variant. , Bloomberg

Those are just a few of the challenges US airlines will face as this year’s summer travel season swings into full gear. A surge in demand will test their resiliency as they seek to return to profitability and move past the pandemic that crippled the industry the past two years.

Carriers say they’ve taken steps that leave them well prepared to cope with any hiccups, but early signs aren’t great. Already this year, the rate of flight cancellations is six times what the airlines target.

Travel demand has rushed back faster in the US from the pandemic collapse than in any market globally, and the number of passengers flying over the next three months could exceed pre-Covid levels. Planes will be packed because flight capacity is well below 2019 levels, in part due to crew shortages. That combination creates a precarious balance, and disruptions from summer storms, computer glitches or other sources could strand passengers with little hope for a quick fix.

Carriers are desperate to avoid the types of snarls that hit last year, most initially triggered by weather but worsened when airlines that had ramped up flying too quickly didn’t have enough crews or planes to recover and avoid widespread cancellations. Spirit Airlines Inc. had a miserable 10 days in August, canceling 2,826 flights and enraging thousands of passengers. Southwest Airlines Co. dropped nearly 3,100 over four days in October, and American Airlines Group Inc. scrubbed 1,900 over a weekend later that month.

Through May 22 this year, a group of seven major carriers had canceled 3% of flights, according to data tracker FlightAware.com, above the normal industry target of holding cancellations to between 0.3% and 0.5%. That compares with a 1% cancellation rate for summer 2021, when 12% of flights were delayed an average 42 minutes.

“All the airlines and support businesses have adjusted their staffing appropriately and we have as well,” said Ted Christie, the chief executive officer of Spirit. “We feel very good about our staffing.”

European airlines also are rapidly scaling up to tap massive pent-up demand for summer travel. At the same time they’re struggling with staffing, especially in the UK where carriers cut large chunks of their workforce through the pandemic, and at some continental airports. The travel chaos isn’t being mirrored by Asia-Pacific airlines as the recovery gets underway, except in China where Covid-related lockdowns are causing disruptions.

An early test for US airlines comes this month when about 12.4 million people are expected to fly during the four-day Memorial Day weekend that kicks off summer, compared to 8.9 million screened by the Transportation Security Administration over last year’s holiday period, according to travel search engine Hopper Inc. The number of daily fliers over the full summer could at times hit 3 million a day, surpassing a former high of 2.8 million, the American Association of Airport Executives forecast earlier this month.

At the same time, capacity will be 8.3% below 2019 levels in June on domestic routes flown by the six largest US airlines, according to data from Cirium. It will be down 6.6% in July and 4% in August. Flights have been trimmed for a number of reasons, including a shortage of pilots. Others have been grounded because rising fuel prices made some flights too expensive to operate.

American completed hiring and training for the summer in early May, well ahead of its usual schedule, Chief Operating Officer David Seymour said.

“Everybody in place across the board,” he said in an interview. “Qualified, legal and available.”

Carriers including American and United Airlines Holdings Inc. are anxious to have strong summer operations as they take advantage of the burgeoning demand and rising fares to end pandemic-related losses. The largest US airlines had net losses of $35 billion in 2020 and $2.8 billion in 2021, according to Airlines for America, their lobbying group.

Airlines say they’ve trimmed flying to just what they have staff to operate, after ramping up hiring for jobs ranging from cockpit and cabin crews to baggage handlers and call center workers. They’re replacing thousands who left their jobs during the downturn.

While a poor performance this summer likely won’t quell the desire of Americans to fly, carriers do risk a loss of customers and revenue, as well as the risk of reputational harm, Harteveldt said.

“That’s really what airline executives are clearly looking at,” he said. “They recognize there is a very real risk of losing market share and losing any revenue premium they may be able to command if they don’t do a good job.”

One positive dynamic for the carriers is that with demand exceeding supply, they’ve been able to boost fares. Domestic ticket prices jumped 18.6% in April from March, the biggest such increase since the US Bureau of Labor Statistics started tracking the numbers in 1963. Prices were up 33.3% year-over-year that month, the most since at least 1990. For the summer, leisure fares are up about 25% from pre-pandemic levels, and 50% higher than last year, according to Hopper.

So far, carriers including Delta Air Lines Inc., United and American, have said the surge in US inflation isn’t discouraging travel. Robust demand is allowing them to cover average jet fuel prices that have more than doubled this year over the same period of 2021.

The Transportation Security Administration says it’s ready for a surge in travelers, after a hiring spree brought the number of agents to 47,500 from about 46,000 at the start of last summer.

“That’s not to say that there won’t be possible hiccups along the way,” Administrator David Pekoske said on May 10. “Those things are going to happen, but we’ll do everything we can to recover quickly.”