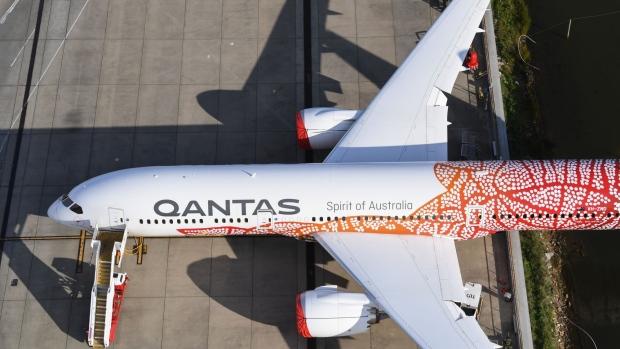 A Qantas Boeing 787 on the tarmac at Sydney Airport, July 22. , Getty Images via Bloomberg

When it comes to raising money, nothing is off limits for airlines mired in their worst-ever crisis. From fresh vegetables to peanuts and pajamas, they’re selling almost anything to make it through the pandemic.

Even airlines that received government bailouts and slashed costs are looking for new revenue streams as they burn through cash while fleets are largely grounded and people stay at home. A recovery is expected to take years and cost carriers billions of dollars more.

Here’s a look at what airlines are pedaling as they try to make up for the hit from COVID-19:

With its international fleet grounded until at least mid-2021, Australia’s Qantas Airways Ltd. is renting out one of its Boeing Co. Dreamliners for sightseeing trips over the southern ice cap.

Antarctica Flights is chartering the plane and crew from Qantas for seven trips between November and February. The flights last between 12 and 14 hours, and a business-class seat with full in-flight service costs A$7,999 (US$5,850).

Qantas also sold items typically given away to premium passengers, including 10,000 sets of pajamas that it said were snapped up in a matter of hours. The A$25 amenity packs usually doled out free to people in the front seats were available online and contained hand cream, tea bags, chocolate biscuits and smoked almonds, among other in-flight treats.

Qantas may also salvage something from its Boeing 747s, which were retired early due to the crisis. A spokesman said some of the cabin interiors, such as first-class tray tables, might be sold as memorabilia.

Air North, the 43-year-old airline that connects Canada’s remote Yukon with hubs such as Vancouver, branched into home-delivered airline meals. Menu offerings include beef pot pie for $9.00 (US$6.88) and a selection of cheesecakes for $13.99.

Customers can order as many as 20 of the pre-cooked, frozen meals at a time, to be dropped off by a driver the next business day. The meals are only available in neighborhoods in the northwestern city of Whitehorse and the delivery charge is $10.

Japan’s ANA Holdings Inc. sold tickets for a charter flight to nowhere. About 300 passengers paid for a so-called Hawaiian resort experience on an Airbus SE A380 that typically flies the Tokyo-Honolulu route. The passengers were picked through a lottery.

Crew wore masks and Hawaiian shirts and served cocktails during the 90-minute trip.

Starlux Airlines introduced a “pretending to go abroad” flight piloted by its chairman on Aug. 7, and 188 tickets for the trip along Taiwan’s east coast were snapped up in 30 seconds, according to Focus Taiwan. Starlux did another flight for employees and paying customers on Aug. 16, also flown by its chairman. Tickets cost NT$4,221 (US$144) each.

Air New Zealand Ltd. is considering sub-letting some of its headquarters in Auckland as part of a review of costs. Local media said as much as a quarter of the company’s six-story office, or 5,000 square meters of floor space, is up for grabs. A spokesperson for the airline declined to comment further.

AirAsia’s Ourfarm e-commerce venture aims to tap the airline’s cargo, logistics and payment capabilities to connect Malaysian farmers directly with hotels, restaurants and supermarkets. The site sells everything from potatoes and pak choi to pineapples and chicken.

Faced with a slump in demand, airlines in China started offering unlimited flight packages to lure customers back onto domestic routes.

Among them, China Eastern Airlines Corp., one of the nation’s “Big 3” carriers, in June advertised unlimited weekend flights for the rest of the year for a single fee of 3,322 yuan (US$487). More than 150,000 people used the pass over just two weekends, the airline said. On some flights, they accounted for more than 90 per cent of the passengers.