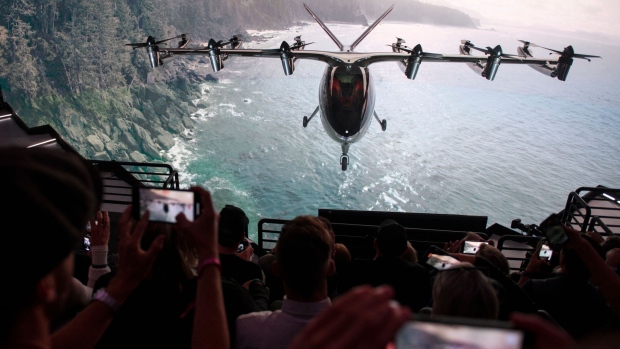 Flying taxis moved a step closer to becoming a fixture buzzing across urban skyscapes, as a closely watched effort was unveiled in Los Angeles and startups in the U.K. and Brazil made commercial breakthroughs.

Vertical Aerospace Group, based in Bristol, England, won conditional orders for as many as 1,000 electric aircraft that could total US$4 billion from buyers including American Airlines Group Inc. and Virgin Atlantic Airways Ltd., it said late Thursday.

And in California, startup Archer Aviation Inc. showcased its future eVTOL after nabbing a US$20 million investment from United Airlines Holdings Inc. The carrier plans to buy as many as 200 of the aircraft, dubbed Maker.

While none are certified for commercial use, approvals for electric flying taxis could come as early as 2024, according to Europe’s top aviation regulator. Airlines are placing orders because they see the potential to develop a new business tied to local transport, as their main activity shuttling people on longer trips comes under pressure over carbon emissions and the impact of the COVID-19 pandemic.

“We believe that this is the beginning of the next big evolution of urban air mobility,” said Domhnal Slattery, chief executive officer of aircraft lessor Avolon Holdings Ltd., which is investing US$15 million in Vertical Aerospace. “This is probably as significant as the jet age.”

Flying taxis are designed to accommodate just a few passengers, akin to an electrified helicopter. But they are quieter, more agile and emission-free, utilizing multiple small electric rotors.

The aircraft are designed to make short trips, with a range of 100 miles (160 kilometers) or less, and are expected to ferry well-heeled commuters above congestion-plagued urban spots -- to the airport, for example, or a weekend getaway. Many eVTOL makers plan to eventually transition to pilotless aircraft.

The popularity of special purpose acquisition vehicles has been a catalyst to the budding industry.

Vertical Aerospace is going public through a reverse merger with Broadstone Acquisition Corp. in a SPAC deal that values the combined companies’ equity at about US$2.2 billion.

Archer, based in Palo Alto, California, plans to merge with a SPAC run by investment banker Ken Moelis later this year that would value the combined company at about US$3.8 billion. Archer expects the Maker will make its first flights in the fourth quarter and begin commercial production next year, assisted by the automaker Stellantis NV. Service is projected to start in Los Angeles and Miami in 2024.

Embraer surged 15 per cent Thursday after confirming that it’s in talks to merge its Eve Urban Air Mobility division with blank-check company Zanite Acquisition Corp., giving it a valuation of about US$2 billion.

Two other eVTOL companies, Joby Aviation and Lilium GmbH, have agreed to go public through SPAC mergers. Another German startup, Volocopter GmbH, has backing from airport operator Atlantia SpA and others.

Last week, Eve said it struck a partnership with Halo Aviation Ltd., a helicopter travel provider in the U.S. and U.K., with delivery of 200 aircraft starting in 2026.

Commercial use of eVTOLs is expected to begin with carrying packages before passengers are added to the cabins.

And automated flights, without pilots, will come around five years later, as global regulators work out their approaches to safety.