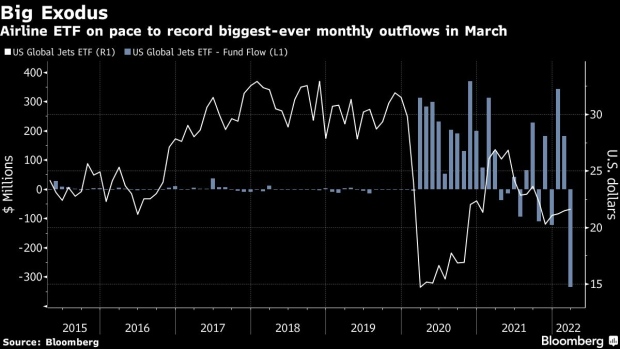 (Bloomberg) -- Airline stocks managed to outperform the S&P 500 Index in the first quarter as economies reopened and people started traveling again, but prospects for a sustained rally look shaky.

An exchange-traded fund that tracks the sector is on pace for its biggest-ever monthly outflow in March. Since Russia invaded Ukraine more than a month ago, oil prices have shot above $100 a barrel and jet fuel prices have soared, and with the war showing no sign of abating, those headwinds are unlikely to go away anytime soon.

The US Global Jets ETF’s outflow for March stood at about $335 million, according to Bloomberg data as of Thursday morning. The fund’s second-largest monthly outflow was in December, about $122 million.

After a spate of upbeat outlooks from several carriers suggested demand for air travel was stronger than what the market had anticipated, airline stocks have rallied back over recent weeks from the lowest levels since October 2020. Though airline stocks have outrun the S&P 500 this quarter, their gains for March have lagged the broader index.

“We are currently not recommending the industry specifically,” Keith Lerner, chief market strategist for Truist Advisory Services, said, adding that despite recent gains, the airline index is still in a downtrend from a technical perspective. “We expect oil prices to remain elevated, which will remain a near-term cost headwind for many of the airlines,” he added.

Airline stocks have been among the hardest hit groups in the S&P 500 over the past couple of years, as coronavirus-related restrictions from testing to lockdowns and outright travel bans brought the industry to its knees. While the roll-out of vaccines was initially expected to help bring flyers back, the outbreak of the omicron strain early in the year put the brakes on a recovery. Then came the war in Ukraine, pushing oil prices to multi-year highs and jet fuel to record levels, and threatening to squeeze carriers’ profit margins.

For U.S. airlines, jet fuel typically comprised 20% to 25% of annual operating expenses, but that rose closer to 25% in the fourth quarter, according to Bloomberg Intelligence analyst Francois Duflot. The analyst expects the impact of the price surge to be more visible in the first-quarter results.

At the same time, most U.S. airlines do not hedge against oil price fluctuations. Only Alaska Air Group Inc. and Southwest Airlines Co. have some hedges in place, according to BI.

Still, not everyone has soured on them, betting that as more people get comfortable with resuming travel, airlines will see demand rise and get a chance to command strong prices for the fares, as well as an opportunity to pass on those high jet fuel costs to their customers.

“There remains a massive pent-up demand to get out and about and experience life in a non-pandemic environment,” said Art Hogan, chief market strategist at National Securities. “One only must try to book a hotel room or reserve a seat on an airplane to see that demand is out-stripping supply and likely will for several quarters.”