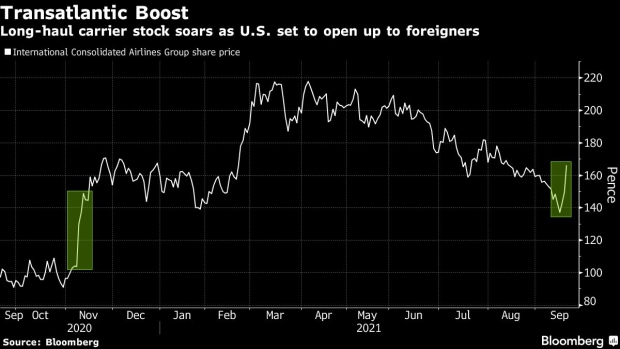 (Bloomberg) -- European trans-Atlantic airlines reacted jubilantly to a U.S. move to allow most vaccinated foreigners to enter the country, ending a ban that’s been in place since March 2020.

Shares of British Airways parent IAG SA, Air France-KLM and Deutsche Lufthansa AG all surged following the Monday announcement, which made clear those without Covid-19 inoculations will still be unwelcome.

The U.S. relaxing of travel rules is “fantastic news for our group,” Air France-KLM Chief Executive Officer Ben Smith said in an interview with Bloomberg TV. “We expect a return of 2019 traffic numbers to move forward very quickly.”

The North Atlantic corridor connecting the U.S. and Europe was the single most profitable corner of the aviation market before the coronavirus crisis, a hotspot for those paying extra for first- and business-class seats. European flag carriers are far more reliant on those routes than their U.S. counterparts, which have extensive, profitable domestic networks to fall back on.

In Europe, regional traffic is instead dominated by discount airlines such as Ryanair Holdings Plc, EasyJet Plc and Wizz Air Holdings Plc.

Carriers on both sides of the Atlantic have lobbied forcefully for a relaxation of travel curbs throughout the pandemic, and particularly after vaccine rollouts gathered pace earlier this year. While the European Union and the U.K. began allowing inoculated Americans over the summer, the Biden adminstration held off on reciprocating.

“There’s pent-up demand both on the leisure and the corporate side,” Smith said. The carrier relied on U.S. routes for 40% of capacity and sales in 2019 and plans to start laying on flights as early as Tuesday, he said.

“With more than 70% of adults fully vaccinated in Europe, we’re happy to see the evidence-based policy-making we’ve been asking for finally coming to fruition,” a spokeswoman said.

The news is “an historic moment and one which will provide a huge boost,” British Airways Chief Executive Officer Sean Doyle said in a statement.