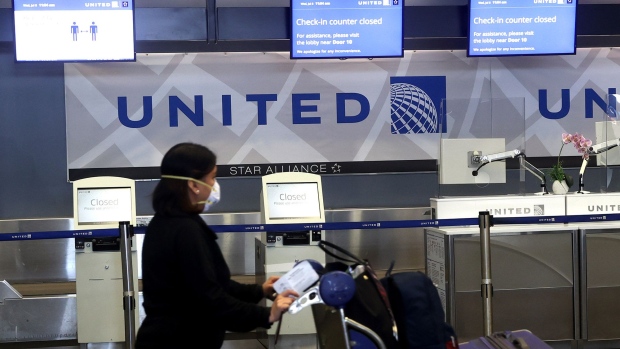 (Bloomberg) -- United and Delta airlines have recently begun boarding flights from the rear to the front in a bid to minimize close contacts between passengers that could spread Covid-19.

Yet new research shows it may do just the opposite: U.S. scientists have found boarding planes starting with the back rows increases the time spent by people clustering in aisles to load bags in overhead bins before taking their seats.

Boarding procedure is just one example of how airlines are struggling to make flying safe during the pandemic, and lure back passengers. Carriers are also instituting inconsistent policies on leaving middle seats vacant that aren’t backed by science. There are huge gaps in data and research, and the Trump administration has declined to set health-related rules for airlines.

“There is an abundance of expert opinions and there is a scarcity of good data,” said Byron Jones, an engineering professor at Kansas State University, one of the small coterie of researchers specializing in cabin air safety.

U.S. airlines say they’ve been consulting with disease specialists while rushing to respond to an outbreak that’s prompted billions of dollars in losses. They’ve added increasingly stringent protections in recent months, a trade group said, from extensive disinfection programs to tighter enforcement of now-universal face-mask requirements. Airline chiefs have issued sweeping reassurances to the public, seeking to get people flying again. The U.S. Transportation Department and other agencies in July released guidelines for lowering risks, called Runway to Recovery.

Yet passenger counts have nudged up only slowly as Covid infection rates soar in some regions even as they ebb in others, and news accounts documented the occasional passengers who refuse to cover their faces. Planes carried about 30% of last year’s loads in the U.S. in the past week, Transportation Security Administration data shows.

According to a review of existing scientific studies on the potential for infection on a jetliner, interviews with leading researchers, and a review of airline policies:

The result is that the choices for many people contemplating flying during the Covid-19 pandemic aren’t simple or obvious.

Take policies to leave middle seats open on planes. Research has shown that spacing passengers out reduces close contacts that could spread the virus, but there’s no data on how such policies impact actual risk, especially when masks are being worn.

Delta Air Lines Inc. has vowed not to book passengers into middle seats at least through this year. Southwest Airlines Co. is limiting the seats it sells through Oct. 31. American Airlines Group Inc. resumed selling planes to full capacity earlier this summer, and United Airlines Holdings Inc. never pledged to keep seats open. American has said it’s impossible to social distance on a flight and that passengers are protected by masks and sanitation measures.

The air fed into the plane’s cabin has passed through filters that are equivalent to those inside hospital operating rooms, so there appears to be little danger of infection from recirculated air, said Qingyan Chen, an engineering professor at Purdue University in Indiana who’s written extensively on disease transmission on planes.

But that’s not the whole story for someone traveling in the close confines of a commercial flight, where it’s impossible to stay socially distanced and contact occurs for hours at a stretch.

“The risk is in the cabin before the air is recirculated,” Chen said. “When you talk and cough, you release these droplets. It will go to the passenger sitting next to you before it’s filtered out by the air-conditioning system.”

A sweeping 2012 government-funded study by Chen, Jones and others concluded that from three to 20 passengers on a four-hour, wide-body flight seated closest to a person with influenza -- thought to be less contagious than the virus that causes Covid-19 -- were likely to become infected.

The odds of infection dropped to nearly zero if everyone wore N95 masks, the high-performance models worn by medical workers in the most dangerous environments, according to the study. N95 masks aren’t widely available to the public, though, and the study didn’t assess what would happen with the less effective cloth masks most widely in use, though Chen estimates they would help.

A 2018 study published by the National Academy of Sciences found a “high probability” that people seated within one row of a passenger with influenza would become infected on a transcontinental flight. The chances of transmission to others on the plane were “very low,” but still possible, it said.

That study also didn’t look at how wearing masks might protect people, so it’s difficult to extrapolate the results to the current outbreak, said Howie Weiss, a co-author and professor of biology and mathematics at Pennsylvania State University.

“Clarity is going to be slow going,” Weiss said.

The trade group for major carriers, Airlines for America, said there had been “no known cases” of infection aboard U.S. flights, and that the aviation industry has followed the advice of the Centers for Disease Control and Prevention.

“U.S. airlines are reacting nimbly to what remains a rapidly evolving situation and are working collaboratively with medical experts to advise decisions around cleaning and operational procedures,” the group said in a statement.

Actions also include no-contact check-in and requiring passengers to vouch they are healthy before flying, the group said.

Instead of seating their best customers first, near the front of the plane, followed by multiple groups who sit further back, United and Delta are filling their jets from back to front, they said on their websites. But instead of reducing contacts, that actually increases them, according to a team that studied the issue in the wake of the Ebola outbreak in West Africa that started in 2014. The group updated the work this year as Covid-19 spread.

While boarding rear-to-front decreases the time people in the aisles spend close to those already seated, it increases contacts overall as people stop to load bags in overhead bins before taking their seats, said Ashok Srinivasan, a computer science professor at the University of West Florida who co-authored the papers.

Rear-boarding increases passenger exposure by 50% compared to boarding by zones, the researchers found. Random boarding regardless of where people are seated, which naturally spreads them out, is even better.

“It’s a free solution,” Srinivasan said. “There’s no cost involved, either in time or money.”

Delta developed its boarding system, which also encourages passengers to remain well spaced, with the help of experts at the Mayo Clinic and the CDC, said Bill Lentsch, the company’s chief customer experience officer.

“They believe we have designed an extremely safe process and encourage us to continue the back-to-front boarding,” Lentsch said.

The company recognizes that no single action can fully eliminate the risks related to the virus, which is why it’s taken scores of other steps and continues to make improvements, he said.

Meanwhile, government agencies haven’t been willing to draw up a formal plan for how the aviation sector should respond to a pandemic, the Government Accountability Office told Congress in June. The GAO has been calling for such a plan, which is required by an international treaty, since 2015.

The DOT has said other agencies overseeing health and homeland security should be responsible. Transportation Secretary Elaine Chao said the agency’s suggestions, released on July 2, would reduce risks and allow an increase in passenger volume.

Jones, who’s studied health risks on airliners for decades, said the issue cries out for more research. Disinfecting planes, enforcing mask requirements and other protections make sense, he said, but the evidence isn’t there to show that they can overcome the risks created in the tight confines of a jet cabin.

“That’s the one question we really, really don’t know yet,” he said. “That’s the challenge here. You’re working in a vacuum.”